I first encountered Trijicon sights in the IDF (Israeli Defense Force). I received the Trijicon ACOG sight for my M4 rifle and never looked back (so to speak). Since then, Trijicon has been one of my favorite optics/sights manufacturers. I use the Trijicon HDs on my everyday carry GLOCK 19. Naturally, I jumped on the chance to review the new Trijicon HD XRs.

The original HDs were designed to be the optimal defensive night sights. They feature a bright orange or yellow front sight with tritium (.144”) and and a wide back “U” notch rear with tritium.

Their only shortcoming: trying to shoot at long distances. The front sight covers the target completely. Trijicon tried to alleviate the distance problem with the HD XRs, maintaining the defensive purpose of the sight with a slightly slimmer front sight post (.122”) and smaller dot.

Trijicon offers two options for the front sight, yellow or orange. The XRs are noticeably thinner than their older HD sisters, with the orange dot and a tritium lamp positioned in the center. The dot itself sits towards the top of the post. The rear sight’s the same .169” “U” shape notch as the older HDs with tritium lamps. The rear sight was designed with defensive shooting in mind, the angled construction allows for one-handed manipulation (i.e. racking off of a belt or shoe).

To test the sight I installed it on a stock GLOCK 19 gen 4 pistol and used it on one of my two-day pistol courses. When I demonstrated my first live fire drill — a simple five-round warm-up at three yards — I was surprised and disappointed by the sight. There’s a mismatch between the front and rear sight, both vertically and horizontally.

Trijicon kept the same exact rear sight while changing the front sight, making it harder to center the dot in the rear sight. This is especially true vertically, where the rear sight is significantly harder to position in a correct sight picture. This mismatch between rear and front sight creates a lot of issues when trying to find the right sight picture – “equal height and equal light.”

At close range, I found it somewhat difficult to achieve the correct sight placement. As mentioned above, the dead space made it difficult to properly align the sights for a proper sight picture and continuous follow-up shots. That said, after some trial and error, I could group shots nicely at three, five and seven yards. 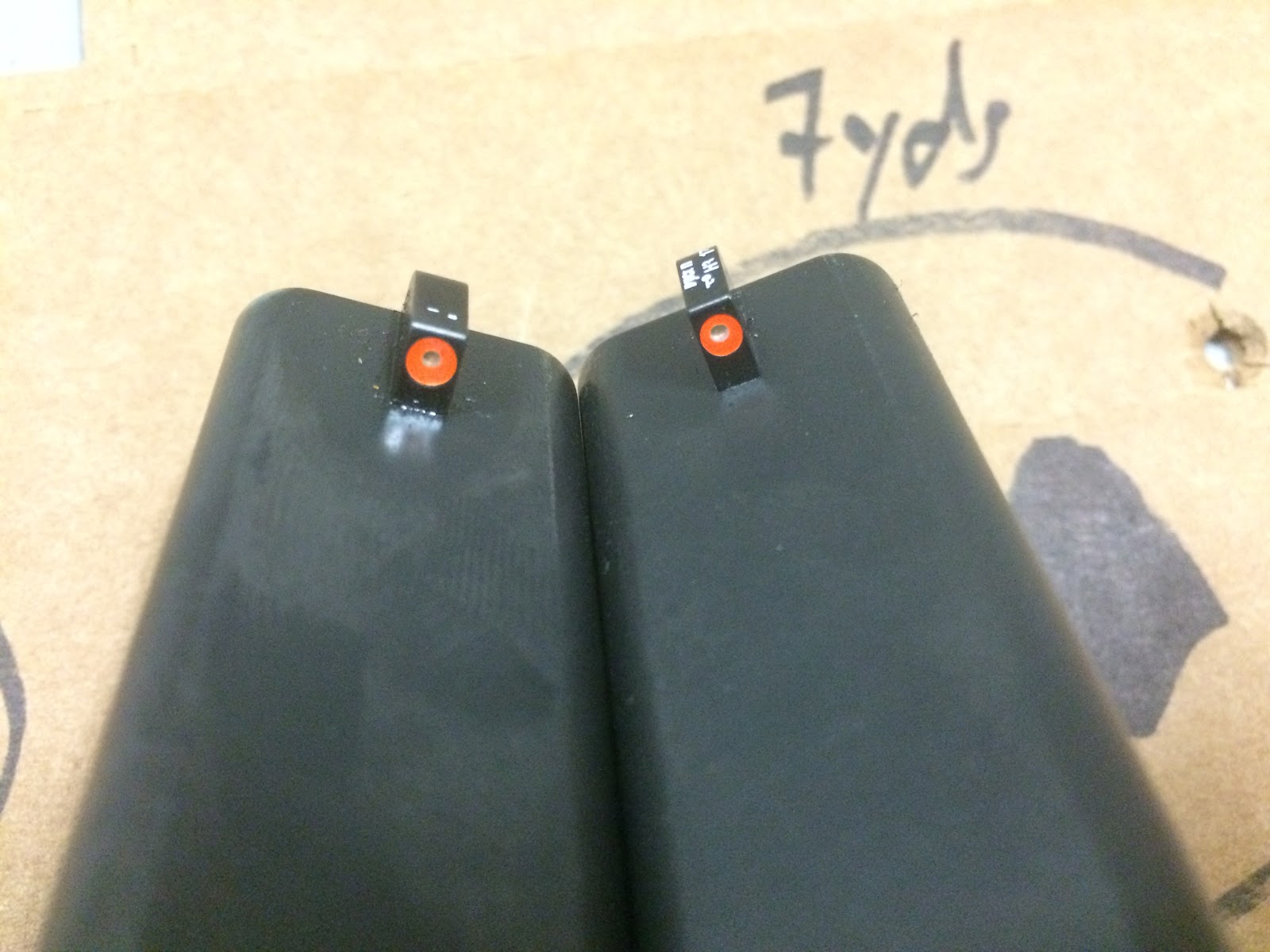 At mid-distances, from about eight to 25 yards, I didn’t notice any difference in the Trijicon HD sights versus the Trijicon HD XR sights; at this point I was already accustomed to the sight picture required to place shots on target.

The XRs really shined once I started shooting steel past 25 yards. The thinner front post made for significantly easier aiming at long distance and it didn’t cover the target completely. In fact, I was easily able to hit the steel consistently from a standing non-supported position at almost 100 yards.

For night shooting the tritium lamps shine well and slightly illuminate the dot. The sights would have been much better with a completely blacked out rear sight; in complete darkness it is almost impossible to tell which dot is front or rear. Still, the Trijicon HD XR sights are great defensive night sights.

Trijicon should have made the rear sight and the height of the front post proportional to the size of the front sight’s dot. The proportionality between the sights would make it a lot easier to maintain a sight picture. If you’re looking for a great defensive night sights for your EDC, stick to the original HDs, unless you are planning on doing long distance pistol shooting. 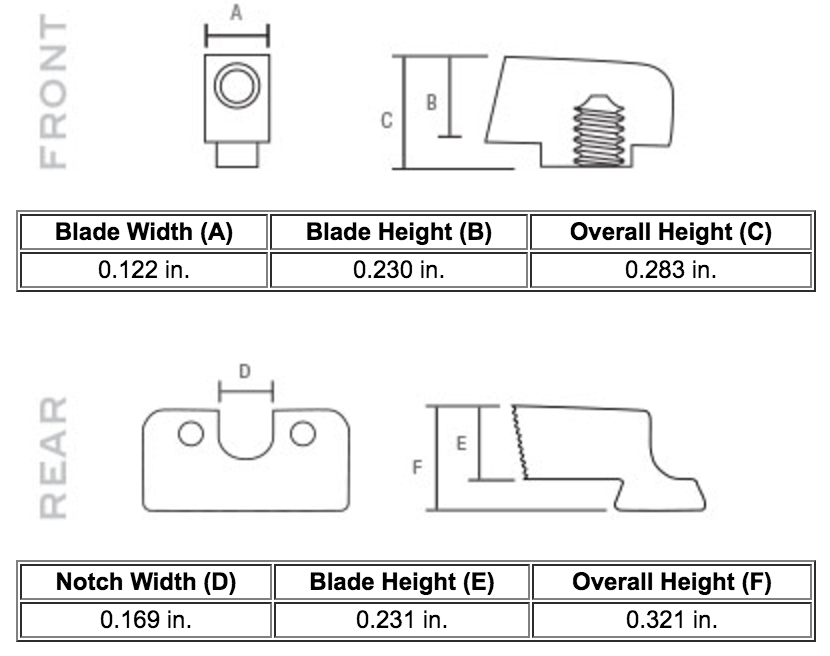 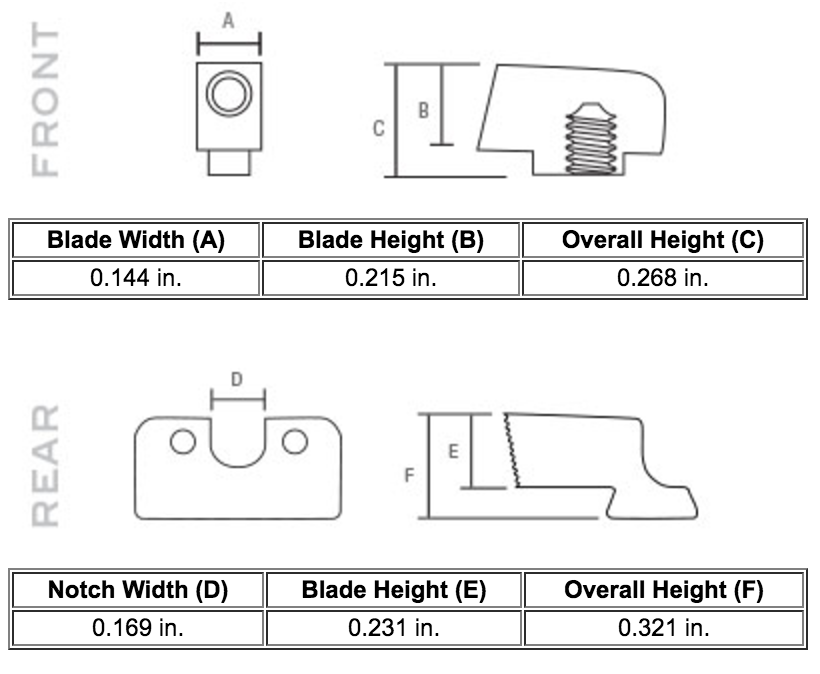 Build Quality * * * * *
Durably built steel construction, made in the USA.

Function * * *
As a defensive sight, they don’t serve their function. Trijicon missed the mark. However, the front sight does allow for very fast target acquisition and sight picture.

Overall Rating * * *
A more proportional sizing between rear and front sight would have made it an exceptional sight. In the end you’ll get used to the proportional issues.