I read a lot of chatter on the internet that the majority of modern AR-15 models are overgassed to an extreme degree. I’m not a machinist or a gunsmith, so my experience is mostly seat-of-the-pants on the topic. What I can tell you is that I can’t remember the last time I shot a factory AR that refused to lock to the rear on an empty mag or failed to strip a fresh round. What I have had are a lot of guns that force the bolt carrier group and buffer rearward with a great deal of authority, a signal that perhaps more gas is being bled off than is really needed . . . This problem is only magnified by shooting with a silencer screwed to the muzzle. With the exception of one company that specifically claims to reduce gas blowback with their silencers, most manufacturers acknowledge that screwing a can to the end will increase back pressure. Short term, this is an annoyance as you’ll get hot, dirty gasses delivered straight to your face. Long term, it is hard on the various moving bits of your firearm and one day, someday, maybe, it will lead to premature wear.

Enter the adjustable gas block. Using a machined screw, the amount of gas making its way through the gas system can be regulated down to just what is necessary for reliable function and not a touch more. The advertised benefit is decreased wear, and smoother, flatter shooting rifles. Add in a nice muzzle brake, and you’ll be able to squeeze off triple taps with zero muzzle rise. Take a look at any of the competition rifles at a 3 Gun match, and you’ll see adjustable gas systems all along the line.

When I set out to build an upper for competition, I took a chance on an Odin Works barrel, something I haven’t regretted. As part of the checkout process, their website asked if I wanted to add an adjustable gas block to my order. At $54 for the upgrade ($90 as a standalone), it isn’t a cheap option, but my grandpa always told me, “It only costs a little bit more to fly First Class.” Installation was no more difficult than any other low profile gas block, and I have to commend Odin for making a gas block that fits the same footprint as their regular low profile gas block. It secures to the barrel with two set screw on the lower side. Odin even includes all the wrenches you need for the various screws and adjustments. Before I installed the unit, I tore it apart to see how it all worked. I was tickled to find that gas regulator, the long silver piece you see above, has detents machined at set intervals around the perimeter. These work with the set screw and ball bearing detent to ensure that once set, the regulator isn’t going anywhere. You can crank down on the detent screw enough that the regulator won’t turn, a feature I appreciate as someone who has a habit of unintentionally breaking things. All this is backed by another set screw that secures the detent in place. That’s the little threaded piece you see to the right of the ball bearing. Once set, these various screws ensure that your gas position will not be changing unintentionally. Once installed on the gun, a quick trip to the range, a magazine, and a box of your favorite ammo are all you need to tune it up. Simply start with the gas system at the most open position, load two rounds in your magazine, fire both and ensure the system functions. If it does, screw the detent down one position. Check function again. Repeat this process until the rifle fails to lock back on an empty magazine. Once you’ve reached failure, go back one position and lock it down. The Odin system has twenty positions available, ensuring that you have a broad range of adjustments. Mine ended up being right in the middle with fairly low pressure .223 REM ammo. Odin doesn’t make a distinction on what you should use as your tuning load, but I tuned mine to work with the weakest factory ammo I could find. If you’re setting this up for competition, and you know the load you’ll be using, you can tune it even further. As this is my testing rifle, it needs to function with everything so it is still slightly overgassed with high pressure ammo.

Since installing the gas block nearly eight months ago, I’ve run the better part of five hundred mixed rounds through the rifle without a single failure. This included my trip to Pecos for Run n Gun, an event that looks for weaknesses in gear and exposes them to the world. Between the brake and this gas block, I’ve got a pussycat of a rifle with very little muzzle rise and a very smooth action that still functions with everything I’ve thrown at it. 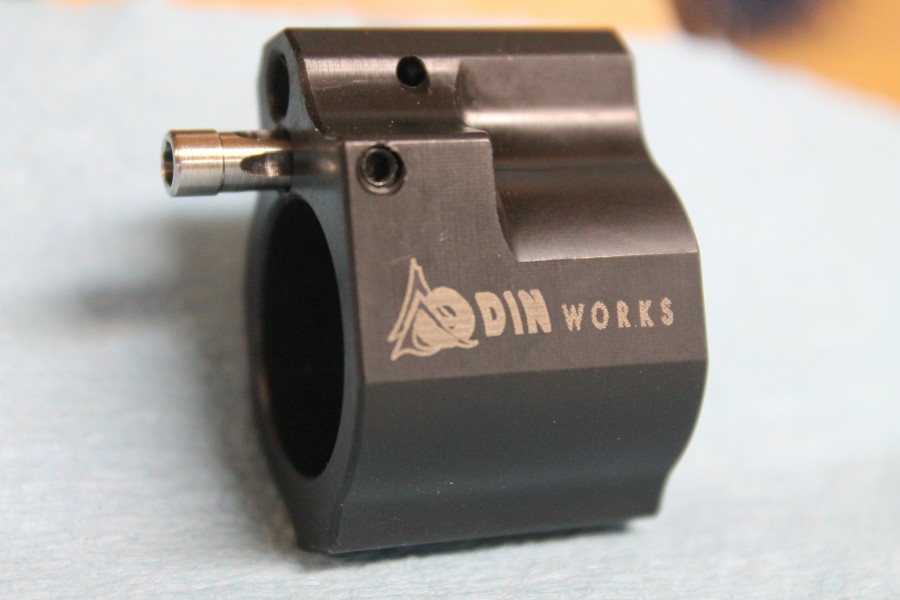 Fit, Finish, Build Quality * * * * *
As I’ve come to expect from Odin, this was a well thought out and well executed piece of gear. At $90, it better be flawless and it is. I had zero issues installing or adjusting it. Many months and several hundred rounds later, it still looks and functions great.

Overall Rating * * * * *
I fully acknowledge that an adjustable gas block is a bit of a luxury purchase. Regular, low profile gas blocks are a dime a dozen and if you’re more interested in reliability over shootability, an overgassed AR is certainly one way to go about getting it. I’ll hold off on objective opinions until Jeremy and I can test this against a regular low profile gas block in his fancy recoil sled, but my seat-of-the-pants impression is that felt recoil is reduced to nothing, and my gas system can be tuned for silencer usage or weak/hot loads. That’s justifies the price.