The debate rages on throughout the Internet about which optic is the best for your 3-gun rifle. Some say Swarovski, but I disagree. Others say Trijicon, and I tend to agree. But what if you don’t have $800 to spend on a scope? And what if you want something that will do a little better at long distance targets? Well then, Leupold has just the ticket . . .

Caveat: Leupold is now one of my sponsors. However, this review was written before that happened and the conclusions were reached independently. All I was waiting for was confirmation of some of the features, which I have now received. Nevertheless, I’m throwing that out there for you to contemplate. On with the review.

I was riding back from the Crimson Trace press junket in Arizona with Tim O’Connor from Leupold at the wheel. Somehow during the discussion I disclosed my affinity for first focal plane scopes, with their fidelity of measurement at every magnification and how I thought they were the bee’s knees. Tim disagreed. And not necessarily because the second focal plane reticle allows the shooter to have a greater range of measurement, but mainly because they were cheaper and just as useful. I told him to prove it, and about a week later a Mark AR MOD 1 scope showed up on my doorstep. The first thing you notice after you slap it on your gun is that it’s light. In fact, it weighs almost half as much as the Trijicon 1-4x scope and significantly less than the 3-9x scope I usually use. In 3-gun competitions (as well as military and LEO applications), weight is everything. The lighter you can make your guns, the faster and harder you’ll be able to run them.

As far as the controls are concerned, at first glance everything feels right. The clicks of the turrets are crisp and accurate, and while the magnification adjustment ring might seem a little stiff it nonetheless rotates freely and smoothly.

Speaking of the adjustment knob, while it works fine when just farting around at the range, it’s a little tough to adjust mid-stage. Just like every other scope, actually. So if you’re planning on using it in competition, either set it before the buzzer or grab a cat’s tail adapter.

So, the usual bits work just fine. Great. But there are two features that really set this scope apart from the others: the reticle and the elevation adjustment knob. One of the reasons I really like the Trijicon over the Swarovski was that the Trijicon was simple. There wasn’t a whole lot  of stuff cluttering up the scope, let alone stuff that no one quite knew what it was. I mean, hold markings are great, as long as someone tells you what distance they’re used for. But while the Leupold reticle is indeed more cluttered than the Trijicon (with its single green triangle), it’s cluttered in a useful way.

The markings on the scope reticle, at full magnification, are 2.5 Mils for every mark (5 mils for every larger mark). Which makes that giant circle 10 Mils in diameter, or 5 Mils from the center. When doing longer range shooting, having a Mil based reticle is a huge help. If you know your holds, then you just need to adjust the reticle and let the rounds fly.

Also, if you don’t know the range to the target, a Mil reticle can help you figure out the distance to a target of a known height. I’ve had a couple competitions where the stage didn’t tell you how far away a given target was (~400 yards for one) and so you had to guess. But if I had a Mil reticle, I could have figured it out and hit the target without needing to walk the shots in. 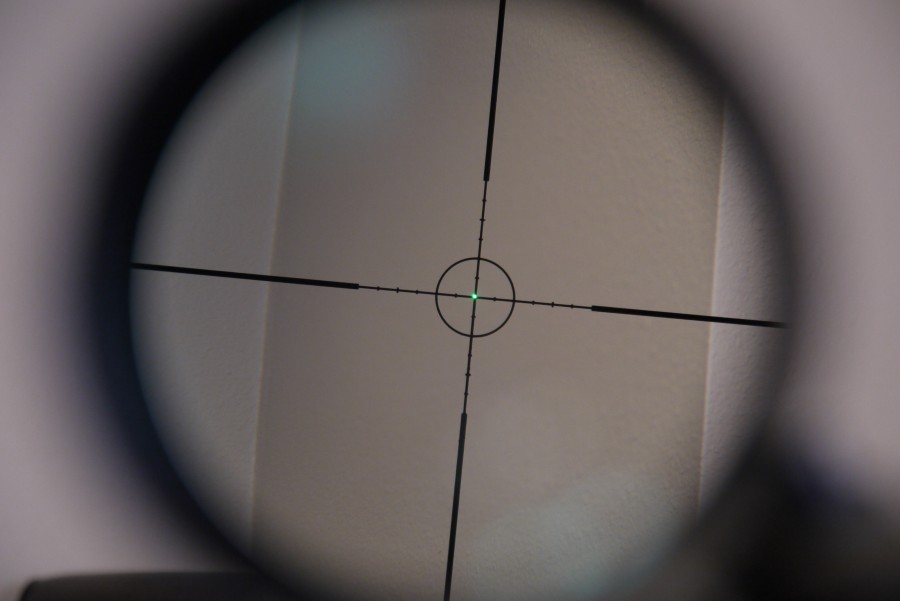 And while the reticle is slightly cluttered, Leupold have designed the scope with an illuminated center dot. With the dot fired up, it’s really easy to pick up the target and quickly make your shots. Basically, combined with the low base magnification it turns the scope into a red dot. The power is adjusted through pressing a button on the side of the scope on top of the battery compartment, and it lets you know when you’re at the maximum as well as the minimum illumination by blinking a whole lot. As far as I can tell though the dot never really turns off completely, but after a couple months of testing I have yet to need a new battery. The scope takes the standard pancake style watch batteries you can get at your local HEB, so simply pop a new one in before a big competition and you’re set. The other feature I really liked was the ballistic turrets. Zeroed for 100 yards, the turrets have markings for standard 55 grain 5.56 ammunition to tell you approximately where you should rotate them to compensate for the drop at different distances. 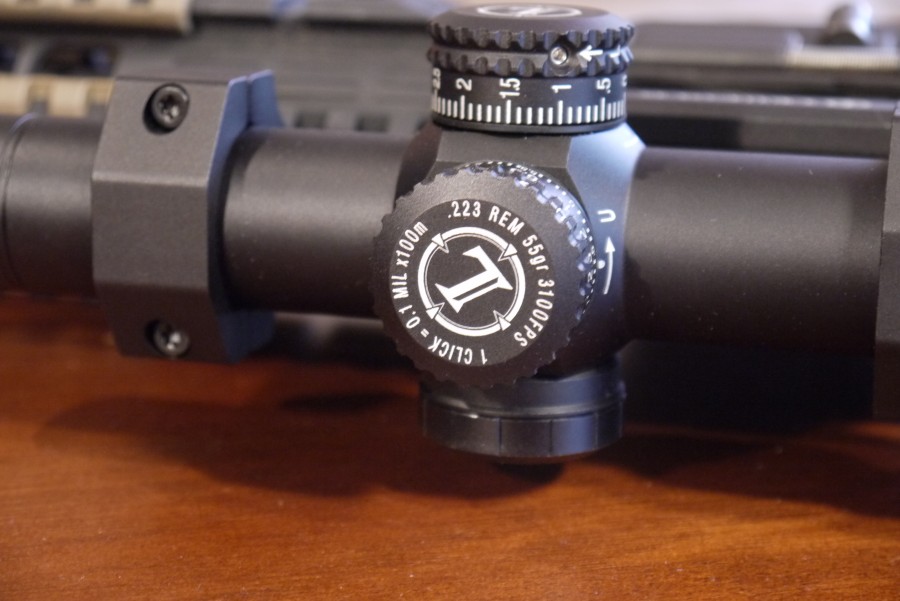 Because the turret here is marked with a specific bullet weight AND velocity (THANK YOU LEUPOLD!) we know exactly what kind of ammunition it is compatible with, and we can adjust based on our own loads. BTW, the load described on the turrets is roughly equivalent to the standard XM193 loads available as XM193F, XM193BK and XM193I among others (I’ve only confirmed the velocities on these sets). It’s a hell of a lot more convenient than any of the other ballistic compensating thingers I’ve tested on scopes recently, where they don’t tell you anything about what ammo it’s tuned for (Swarovski, I’m looking at you…). Also, while I haven’t found any yet, I get the feeling that they might start producing replacement turrets for other loads so you can swap for the correct one.

So, that’s all fine and dandy on paper at least. The scope has some nice features, and as far as I could tell in my living room everything worked great. But the real test was how well it did on the range. And for that, I took it to my happy place — a 1,000 yard range out near Liberty Hill, Texas. After zeroing the scope at a 100 yard paper target, I took it over to the long range section. At 250 yards, I cranked on the indicated dope and hit the target with boring repetitiveness. For 500 I twisted a little more and rang that steel as well. 750 was off the chart for the turret, but with a little help from my dope chart I was ringing that steel as well. In other words, I can confirm that the range markings on the turrets correspond to the drop at different distances in practice as well as theory. It’s perfectly calibrated and 100% works.

While this may seem like a perfect and glowing review, I do have one gripe. Specifically, that the minimum magnification is 1.5x and not a “true” 1x. It might not seem like a lot, but that extra magnification on the low end means that the scope isn’t functionally identical to a red dot sight. There’s a hair of magnification which can throw you off when you’re transitioning between very close targets. So, I think I’ll be keeping my offset iron sights on my gun for now. 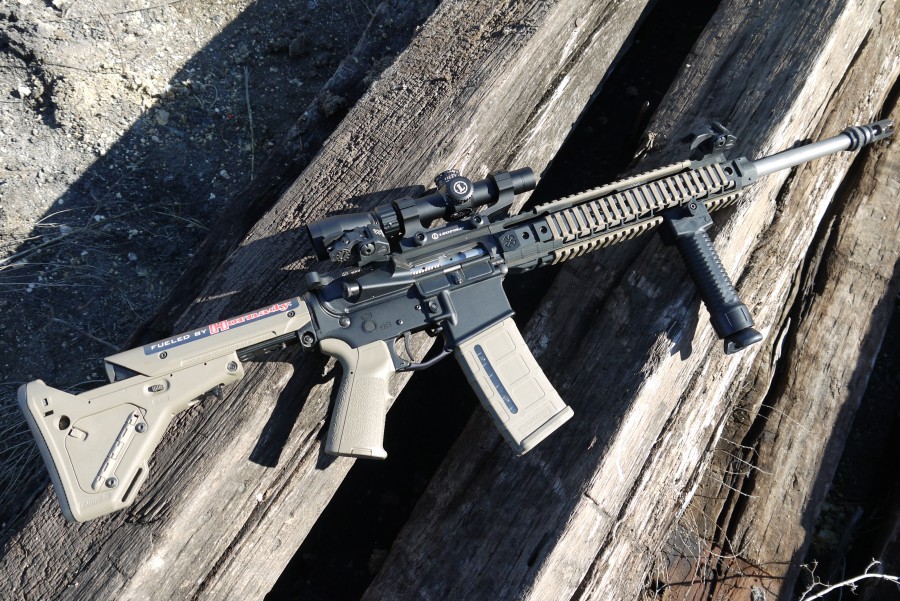 Overall, what we have here is something that is cheaper AND more useful than Trijicon’s similar Accupoint offering. It’s also lighter, smaller, and generally more attractive looking. Plus it’s not filled with radioactive gubbins, so you won’t need a hazmat team when it comes time to recharge your scope’s illumination system. So if you’re looking for a new scope for the start of 3-gun season and you don’t have $swarovski to spend, go for Leupold’s Mark AR MOD 1.

Ease of Use * * * * *
Zero it at 100 yards and it does all the work for you. Opening the battery compartment is a breeze, and adjusting the turrets is a snap.

Overall * * * * 1/2
If you don’t mind the 1.5x base magnification, this scope might be perfect. Cheap, accurate, and reliable as all get-out. For me, it’s just annoying enough to knock off a 1/2 star. But overall, something that I don’t plan on ever sending back to Leupold.