There are only a few things a pistol grip-only shotgun (that’s not really a shotgun) is good for. One is breaching, but let’s face it, how many of us will ever do that?

Another is simply defying the NFA via the 12 gauge “firearm” route. I call it the Shockwave rule. A shotgun requires a stock, so a gun that has never had a stock is not a shotgun, even if it is a 12 gauge pump-action firearm. That means you can have a barrel as short as you want without the need for a tax stamp, as long as the gun is over 26 inches in length.

This requires some compromise and you need the right grip to accommodate a shorter barrel. The Shockwave Raptor grip is one way and the BLACKHAWK Knoxx BreachersGrip Gen III is another. 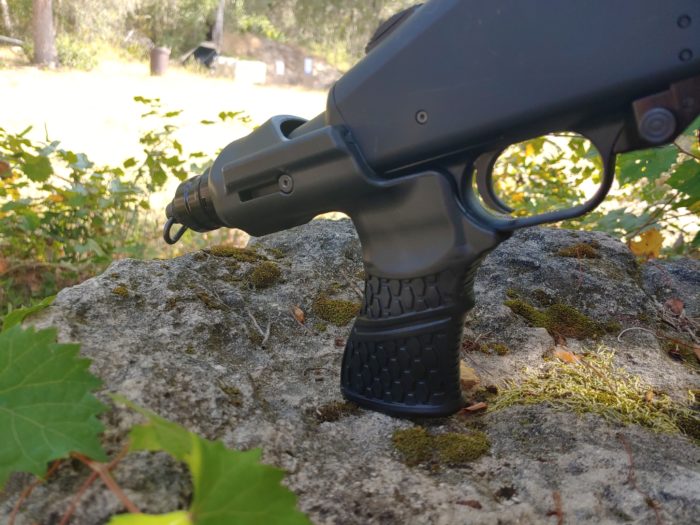 The BreachersGrip Gen III is a more traditional pistol grip, at least compared to the Raptor grip. It features a vertical pistol grip and on the back end, we have an extension that accommodates an internal buffer.

Most vertical pistol grips suck on shotguns. They physically hurt the hands, wrist, and forearms. The internal buffer of the BreachersGrip reduces felt rearward recoil and therefore reduces any pain and fatigue. The buffer extension also adds the necessary length to ensure the weapon stays over 26 inches.

Knoxx sold their patents and properties to BLACKHAWK, and Knoxx went on to become Adaptive Tactical. Adaptive Tactical is the company that designed the magazines for the 590M series. I guess things have come full circle as far as this gun is concerned.

Knoxx is also a branded name for AR and 10/22 stuff. Their AR grip is quite nice and sits on my cheap homemade 80 Lower receiver AR-15 pistol.

The Raptor grip is honestly an excellent option for the Shockwave and TAC-14 series firearms. It’s comfortable, ergonomic, and well made. However, when it comes to the magazine-fed variants of the TAC-14 and Shockwave, the BreachersGrip is a much better choice. The angled Raptor bird’s head grip puts almost all of the weight of the weapon in the forward arm. The BreachersGrip allows you to balance the weight better between the front and rear of the weapon.

When it comes to magazine-fed guns like my Shockwave 590M, swapping magazines is much easier with the BreachersGrip than the Raptor grip. Being able to support the weapon with one hand makes reloads much easier.

The BreachersGrip does an absolutely amazing job of reducing felt recoil. I launched ten rounds of Winchester military spec double-aught buckshot downrange and felt almost zero recoil. The Shockwave jumps and bucks a bit, but I felt zero discomfort in my wrist or hands.

I followed it up with five of those awesome Winchester PDX Defender slugs downrange and it was still very comfortable. I’ve put the BreachersGrip through over a year of hard use and it’s still working without issue. I love shooting shotguns and the 590M is a fun gun so it gets lots of use. There was never a moment where the gun felt hard to handle. I can’t find a 2 3/4″ load of buckshot that’s uncomfortable or painful with the BreachersGrip. I have no fear about holding the gun up and aiming it at eye level and have done so with ease. I can direct buckshot into man-sized targets at 15 yards with almost the same precision as a shoulder-fired shotgun. It certainly doesn’t have the same speed, but for a pistol grip, it’s remarkably comfortable. It’s also stable enough to allow you to keep the gun pointed downrange while swapping magazines. The BreachersGrip makes the weapon feel much more balanced when you are utilizing a full ten-round magazine full of 12 gauge.

Outside of effectively taming the recoil of a 12 gauge firearm, the BreachersGrip is also very comfortable and ergonomically shaped, fitting the hand very well. It’s comfortable to grip firmly and gives you plenty to hold onto. The grip is aggressively textured and won’t slip or slide in your hand. At the end of the buffer extension is a sling point that’s perfect for a single-point sling. The rig may be made mostly of polymer, but mine has eaten a ton of buckshot, birdshot, and slugs. I’ve moved the grip between a standard Shockwave and a Shockwave 590M and it works well on both. It also keeps both firearms over the legal length minimum. The BLACKHAWK Knoxx BreachersGrip Gen III is an excellent alternative to the standard Raptor grip if you prefer something a bit more traditional in design. It’s especially well suited to the magazine-fed variants of these guns. While most will be perfectly satisfied with the standard Raptor grip, the BreachersGrip adds a new dimension of support for the Shockwave and TAC-14 families.

Ratings (Out of Five stars)

Ergonomics * * * *
The BreachersGrip Gen III is an ergonomic design that’s very comfortable in the hand. It’s well made, provides a sure grip, and reduces felt recoil significantly. I took a point off for the mismatch in the Mossberg safety position with a pistol grip configuration.

Durability * * * * *
Hell…that’s what I’ve put this grip through. Hell being tons of buckshot, slugs, and more birdshot than what’s necessary for any good day at the range over more than a year.

Aesthetics * * * * *
A useless category here? Maybe in the long run, but somehow the combination of magazine and pistol grip gives the Shockwave a very distinct and aggressive appearance.

Overall * * * *
The easy-to-install Breachers Grip certainly makes the magazine-fed firearms much easier to handle. The extra extension at the end of the gun gives them the needed length to still be a “firearm” while changing how the gun handles and reducing recoil significantly. It’s much easier to reload a fresh magazine into the gun with a vertical pistol grip.