I hate SERPA holsters. I think they’re difficult to use properly and without the proper training they increase the likelihood of putting holes where holes shouldn’t be. [ED: SERPA redesigned their release button after RF pointed out its specific design defect.] But there’s a problem: they’re convenient, and they work. They provide effective retention of the handgun, yet the mechanism is dead simple to disengage even under stress. Finding something that provides the same retention and ease of use with a different mechanism is rare, but they exist. HT Holsers took a stab at that problem, and their solution is the Speed Draw concealed carry holster . . .

The trick to making a good SERPA alternative is designing a mechanism that releases the firearm when you do something you would normally do during your draw stroke anyway. The SERPA works when you index your finger along the side of the holster. Safariland’s ALS holster releases when you drag your thumb along the inside of the holster. Both are things you’d normally do anyway. They only require a little extra pressure to activate. For HT Holsters, they’ve gone in a different direction. 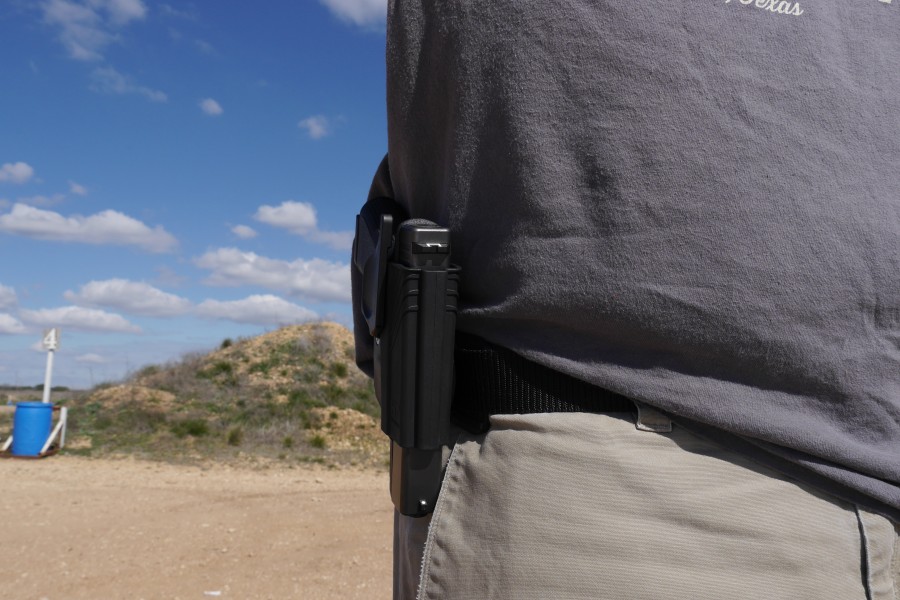 Some holsters release when the gun is shifted in the holster itself (N82), but HT has gone a step further. In their design, the gun stays static but there’s a little paddle along the side that needs to be moved forwards. In theory this should be automatic, as it’s positioned such that you’d need to move it anyway to get a proper grip on the gun. In practice, it’s not exactly that smooth.

Out on the range, the holster works. It keeps my GLOCK 19 snug and secure, no matter how many jumping jacks I do. The holster also carries the gun in a very comfortable position, solidly strapped to my belt and with a great mounting system that allows the holster to be canted to whatever degree the end user wants. The holster itself feels solid and well built, using the usual polymer compounds its a slick finish that doesn’t scratch your gun and isn’t abrasive. And as an added bonus, it keeps the gun very snug against your side for easy concealment. Which is all good. Drawing the holster isn’t quite as easy as I’d like, though. Disabling the retention mechanism requires a good deal of forward pressure, more than normally present in my usual draw stroke. I found that using this holster versus the Safariland ALS increased my draw time (buzzer to first round fired) by a good couple tenths of a second simply due to the need to push forward harder than normal. “Speed holster” indeed.

That said, it works. It keeps the gun retained while allowing a relatively quick draw. With some practice, you could get very good at getting your gun out in a hurry. I like the slim form factor, the ability to customize the cant of the holster, and the general look and feel. But while it works, it isn’t my ideal retention system. I love that there are more and more options on the market, but this isn’t my particular slice of cake. Then again, cake in general is off the menu these days.

Concealment: * * * * *
Even a chunky GLOCK 19 disappears under my shirt with this holster. I like that.

Ease of “Installation:” * * * *
You need to thread it through your belt, but I like that. It feels more solid and secure. But you need to remove your belt to put it on and take it off, which might open you up for cat-calling and having singles thrown at you.

Overall: * * *
I love that it adds more options to the market, and provides a new method of retention. It works, it’s made of quality material, and it’s well priced given the market. But like I said, it’s not my cup of tea.