It all started with the Honey Badger, a strange yet awesome creation from the R&D department of Advanced Armament Corp. back in the day. The plan was to create a do-it-all weapon, one that’s shorter and quieter than an MP5, has the barrier penetration and “stopping power” of an AK-47, uses as many standard AR-15 parts as possible, and can swap from subsonic to supersonic ammunition without needing to adjust any settings on the gun. That’s how the 300 AAC Blackout cartridge came to be, and now SIG SAUER is in the process of perfecting the rifle even further. Enter their MCX . . .

The basic concept hasn’t changed — it’s still a rifle designed to take full advantage of the 300 AAC Blackout cartridge. The gun functions flawlessly with both supersonic and subsonic ammunition, swapping between the two without needing to change a single setting on the gun. But SIG has made some interesting design changes since the original Honey Badger debut that have some impressive effects on the size and function of the gun. The biggest change is that the gas system has been swapped to a as-yet undisclosed short stroke piston based system instead of the standard AR-15 gas expansion system. The original spec for the rifle required the Stoner designed system to be in tact, which explained the short receiver extension that was an integral part of the Honey Badger design. Since the need for a buffer tube is gone, so is the receiver extension in SIG’s design. Instead they opted for a Picatinny attachment point like that on the MPX, allowing the end user to put whatever kind of stock they want on the gun. There are also two QD cups machined into the lower receiver for sling attachment points, should the user want one. 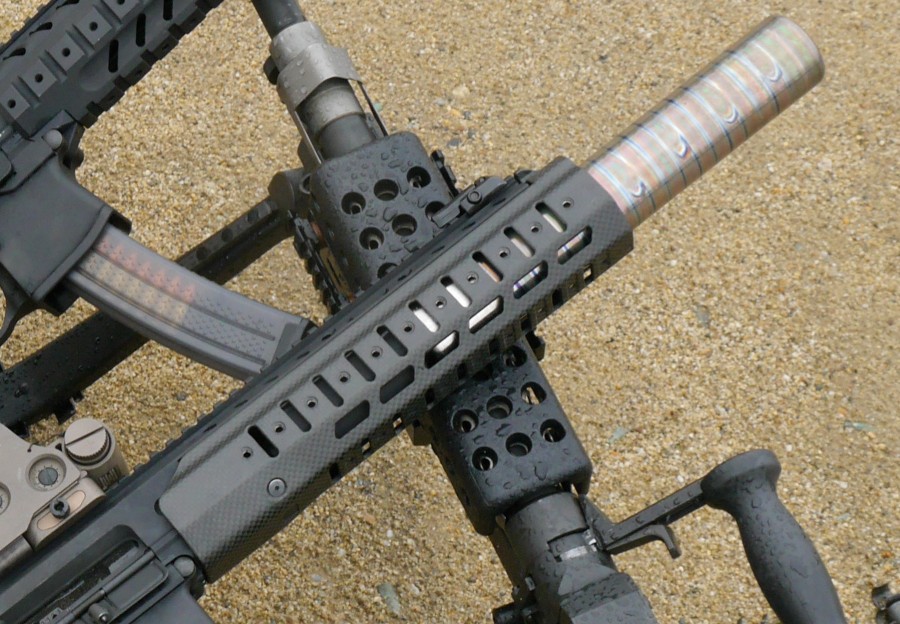 The second big change is the silencer. Ethan Lessard was the R&D guy who spearheaded the original Honey Badger and AAC’s other silencer designs, and for the last two years he’s been working with SIG on their new silencer designs. The latest iteration is so new that when Ethan brought it out to the range it wasn’t even painted yet. Apparently they’ve found a way to remove the spacers in the silencers which were an integral part of AAC’s design and simply weld one baffle straight to the next in the stack. This, combined with some other design improvements, have knocked another 10 dB off the sound meter compared to the original Honey Badger design.

The last real improvement is the forend of the rifle. With the Honey Badger, it was fixed in place. But with the MCX, the lower portion of the handguard can be removed by simply taking out two screws at the rear of the barrel. There’s no need for specialized tools or fiddling with the barrel nut, it just slides off easily and quickly. The current version of the gun uses a carbon fiber forend with some holes drilled for rail sections, but the R&D guys say that they’re probably leaning toward a keymod version for the final product.

The rifle just feels…right. Even with the can on the end, the gun balances well and is very easy to keep on target. The controls are crisp and clean, and the gun is really just a pleasure to fire.

While the gun may look finished, there are still one or two bugs to work out, like the one I captured in the video above. The 300 AAC Blackout cartridge is designed to completely burn its powder charge in nine inches of barrel length, so when you have a rifle with a shorter barrel (like the Honey Badger or the MCX) there’s some unburnt powder left that gets dumped out the front. Add a silencer into the mix and all that unburnt powder starts accumulating in the first baffle chamber. When the conditions are just right, the powder may ignite and the back pressure from the silencer will blow the flames out the chamber and ejection port.

Kevin says it’s rare, and they’re working on fixing that issue. I said the better option would be adding chrome exhaust pipes to the side of the can and maxing out the powder charge. The rifle isn’t quite finished, but even as-is, it kicks ass. The current scuttlebutt is that SIG will be releasing both a 16″ version of the gun as well as a pistol version with their pistol arm brace (a stamp-free SBR basically), but no matter which version you get changing barrel lengths will be easy as pie. The gun is designed to be a true multi-caliber firearm, with barrel changes being an operator level action. The gun will be first available in 300 BLK, with rumors for a 7.62×39 and 5.56 NATO conversion kit coming down the line, and if you want a different barrel length then you can change that on the fly as well.

It really does look like SIG Sauer took the concept of the Honey Badger and ran with it all the way to the finish line. And then decided to make it available for sale to the civilian market and not just for military contracts.