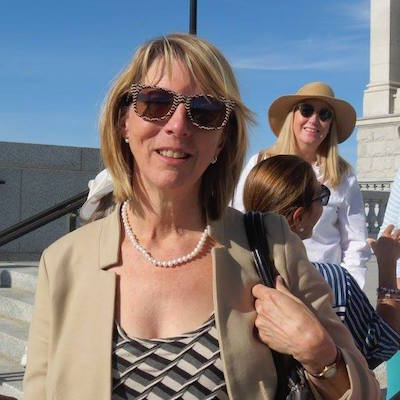 Whether or not this become a new series, let me be clear about my definition of “fake gun news.” I consider “fake gun news” to be complete and utter BS presented as fact. An unsustainable assertion or set of assertions driven by an anti-gun agenda.

OK, you could call that propaganda. But the term “fake news” is so much more au courant. Anyway, that’s the standard. Our first example hails from Nancy Farrar Halden (above), chairperson of the Gun Violence Prevention Center of Utah.

For some reason, the powers that be at sltrib.com published her anti-pistols-in-public polemic Gun lobby builds fear to sell more guns. Yes, it’s an editorial not a news report. But I couldn’t resist.

Most survivors of active assault situations will tell you that they would not have been safer carrying a firearm.

Ms. Halden’s statement presupposes a study of survivors of “active assault situations” (as opposed to “passive assault situations”) where an interviewer asked victims/witnesses “would you have been safer if you’d had a firearm?” To which at least 51 percent said “I was way better off unarmed.” Or, at a minimum, “no.”

[NB: As several commentators have pointed out below, even if many or even most victims of mass shootings did say they wouldn’t have been better off with a gun, it would prove exactly nothing. Not only do Americans have a natural, civil and Constitutionally protected right to keep and bear arms, that right doesn’t depend on the opinion of others.]

To be fair, perhaps Ms. Halden herself spoke with survivors of an AAS; maybe her assertion is based on anecdotal evidence. But I don’t think so. I think she pulled this one out of her *ss.

As well she might. If the obverse were true — if most survivors of mass murders said “I wish I’d had a gun” — her argument against the untrammeled right to keep and bear arms begins to unravel.