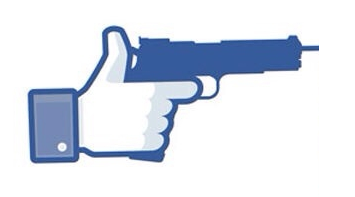 I recently came across a story in California. While it may not directly be related to gun issues, as a member of the Armed Intelligentsia I can’t help but recognize a slippery slope or hypocrisy and draw parallels to the plight of our own. “I know it when I see it.” (You might be a member of the Armed Intelligentsia if you know who famously said this.) And while I respect what police officers do and don’t want to be a cop basher, you have to wonder who justice really belongs to, the citizens or the ruling elite and their wealthy friends . . .

Anyway, Facebook has hired its own police officer who “wouldn’t be getting calls or issuing traffic citations.” Now if Facebook can hire law enforcement officers and choose which laws they enforce, maybe “assault weapons” owners in Connecticut might do the same? What if everyone in a certain neighborhood got a pot of money together and said we want to hire a police officer who only enforces the laws that we want him to. The point of a police force is that your tax dollars go to enforcing the laws whether you want them to or not. If you were a criminal and didn’t want police around, you can’t just choose to make them go away by not paying them.

Menlo Park Mayor Ray Mueller tried to address concerns by saying “The only way that you would have a conflict of interest is if someone tried to exert influence over our police force.” What do you think paying someone’s salary is? If someone at Facebook were to disagree with what the officer was doing, couldn’t they just withdraw funding and make that person go away?

This is a dangerous precedent that Facebook is trying to set. If corporations can directly hire law enforcement and decide which laws they are to enforce, they are just one more step removed from the people they are allegedly there to protect. And while it kind of goes without saying, this will all be largely unnecessary once CA becomes a shall issue state and citizens are able to carry in the workplace. This is something I have been thinking of all day and hope you can share this with your readers. Cheers and keep up the good fight.