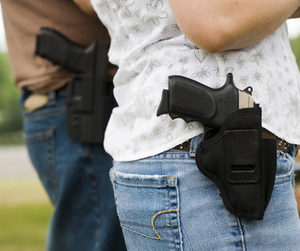 On Wednesday, in the matter of Norman v. Florida, the Florida Court of Appeals held that banning the open carry of firearms does not violate the constitutional right to keep an bear arms. Defendant Dale Norman, who had a Florida Concealed Weapons License, was arrested for openly carrying a holstered firearm in violation of section 790.053, Florida Statutes (2012). The Florida Court of Appeals held that the Florida law banning open cary does not “destroy the core right of self-defense enshrined in the Second Amendment” as non-prohibited persons have the ability to obtain a Florida Concealed Weapons License . . .

Defendant was not prohibited from obtaining a concealed weapons permit—indeed, he possessed one at the time of his arrest. Likewise, Defendant did not argue that he was somehow precluded from the ability to lawfully carry his weapon in a concealed fashion. He was able to lawfully possess his firearm, albeit while concealed, for self-defense purposes as recognized by the Second Amendment, the Florida Constitution, and Florida Statutes. The course of conduct he chose, that of openly carrying his firearm for protection, was not the only option available to him to exercise his rights.

While the right to carry outside the home has been established by the highest court of the land, no decision interpreting the Second Amendment can be cited for the proposition that a state must allow for one form of carry over another.17 Because the Legislature has the right to enact laws regarding the manner in which arms can be borne, it is likewise permitted to forbid the carrying of arms in a particular place or manner which, in its collective judgment, is likely to lead to breaches of the peace, provided a reasonable alternative manner of carry is provided.

The Court of Appeals did allow that there were limitations on the legislature’s power to enact restrictions. In fact, it calls out New York, specifically, as it does so:

We stress, however, that the Legislature’s discretion in this area is not limitless. For example, the federal court in Kachalsky upheld New York’s prohibitive licensing scheme using an intermediate scrutiny analysis that gave too much deference to the legislature, without considering the fact that the licensing scheme in question rendered the right to bear arms outside the home virtually non-existent. See Kachalsky, 701 F.3d at 97 (stating that “[i]n the context of firearm regulation, the legislature is ‘far better equipped than the judiciary’ to make sensitive public policy judgments (within constitutional limits) concerning the dangers in carrying firearms and the manner to combat those risks. Thus, our role is only ‘to assure that, in formulating its judgments, [New York] has drawn reasonable inferences based on substantial evidence.’” (alteration in original) (quoting Turner Broad. Sys., Inc. v. FCC, 512 U.S. 622, 665-66 (1994))). A right is essentially “destroyed [if the] exercise of [that] right is limited to a few people, in a few places, at a few times.” Peruta, 742 F.3d at 1170. The degree of legislative deference exhibited in cases such as Woollard, Drake and Kachalsky goes too far, and would serve to validate expansive restrictions inconsistent with those rights guaranteed by the Second Amendment and the Florida Constitution.

(The Kachalsky decision referenced above can be found here, for the curious; in it, the 2d Circuit held that New York’s handgun licensing scheme does not violate the Second Amendment by requiring an applicant to demonstrate “proper cause” to obtain a license to carry a concealed handgun in public.)

This is a disappointing decision for those who were hoping for a judicial remedy on open carry in Florida. Although I personally don’t openly carry a firearm except to and from the range, it seems to me that the issue ought to be primarily one of aesthetics and tactics. And even if the right to keep and bear arms is technically followed to the letter because the concealed carry option remains available for most people, Florida’s ban on open carry strikes me as a typical bit of nanny-state regulation that serves no discernable purpose that I can figure.

Assuming that this decision isn’t overturned on appeal, people who advocate open carry still have the a path to remove Florida’s ban through the legislature, and I suspect that they’ll at least have an even chance of being able to push it through at some point. Such things are always open to the vagueries of politics, though. It sure would be nice (and here, I admit to a great deal of influence from the estimable Randy Barnett, who makes the case more eloquently than I could,) if courts would concern themselves more with identifying and restricting the powers of the legislature to the letter of the law, and less doing likewise with people’s rights.