DIY Guns, Part 1: An Intro to Modern 3D Printing and Making Your Own Firearms at Home [This is the first in a series on 3D printing for producing your own homemade firearms. (Part 2 here.) Despite the best efforts of federal and state level politicians, making your own guns at home for your own use is still legal in almost every state (some require registration…check your local laws)].

Experienced 3D gun maker Ivan the Troll, head of PR for Deterrence Dispensed, will be taking us through the basics of 3D printing and revealing how easy and affordable producing your own 3D printed firearms has become.]

By Ivan the Troll

In the past five years, there have been massive advances in the world of consumer 3D printing. The quality and capability of these printers have gone up while their prices have gone way, way down.

The FGC9 is a 3D printed firearm that uses zero ‘gun parts’ in its construction – making it a gun anyone, even in Europe, could acquire the parts to build.

This is at least 15 years ahead of US gun regulation efforts – and undoes those already in place across the world. pic.twitter.com/q45Uupglwu

I’m sure many of you are familiar with the early work of Defense Distributed. Back in 2013, the kinds of printers you needed to print guns or gun parts could easily cost more than $20,000. But since 2018, the Chinese company Creality has been producing very affordable printers that have exceptional performance, even compared to the expensive printers from 2013. Their mainstay model, the Creality Ender 3, has become a gold standard of the current 3D printed gun world. The Ender 3 runs around $200 dollars (it goes on sale often for $179, but sometimes is listed for as much as $230 on Amazon).

In this article, I’ll walk you through the basics of 3D printing with a focus on producing your own guns and gun parts.

Perhaps the most important item to touch on is the definition of a “3D printed gun.” Because of how US law defines a gun, it’s factually correct to call a 3D printed AR-15 lower a 3D printed gun – but this point causes consternation for some people.

I tend to break printed guns into three categories:

They are printed guns under US law, but usually only feature one or two printed parts and require other parts to make it operate and go bang. These types of guns are somewhat analogous to Polymer80 GLOCK-style frames, or 80% AR-15 lowers. You order the whole parts kit and make the receiver/frame yourself.

These types of firearm are effectively always based on existing firearm designs and tend to last thousands of rounds. These are firearms that give the outward appearance of being fully 3D printed, but still rely on some metal parts.

Sometimes these metal parts are commercial gun parts — like a GLOCK 17 barrel in the Shuty AP-9 — or sometimes they’re off-the-shelf hardware store parts like screws, springs, or hydraulic tubing.

These firearms tend to have some basis in existing designs, but are unique from commercial firearms, but still tend to last thousands of rounds. The FGC9 (Courtesy Ivan the Troll)

The FGC9 (for Fuck Gun Control 9mm) is a hybrid printed gun based on the Shuty AP-9 that uses an AR-15 (or similar airsoft gun) fire control group and a barrel made from hydraulic tubing.

These tend to be the least common type of 3D printed gun. The most notable examples are the Liberator, the Songbird, and the Washbear revolver.

There aren’t actually any fully printed guns. The guns in this category still use some parts like metal firing pins and sometimes rubber bands as hammer springs.

These designs are usually totally unique and don’t draw inspiration from existing firearm designs. They tend to only last a few rounds, frequently only between 1 and 30.

Adding a barrel liner to these designs can push their life into the hundreds of rounds or more, but adding a liner makes them a hybrid firearm in my mind (see category 2 above). With the definitions out of the way, let’s talk some more about . . .

The prevalent consumer printing technology is known as fused deposition of material (FDM). That’s just nerdspeak for a printer that melts and deposits plastic as it moves around in a computer-controlled path.

There are many other types of 3D printing; SLA which uses a UV laser or light to harden UV-sensitive resin in a computer-controlled pattern. There are even printers that use a high-power laser to melt metal powder in a computer-controlled pattern to create metal printed parts. However, FDM printers tend to be the cheapest and most accessible printers and are the primary focus of the development of 3D printed guns.

Common among most types of 3D printing is that parts are made layer by layer. Each successive layer is built up upon the previous one.

These FDM printers are quite simple in design – they feature a print bed, where the part is built up from, a hotend, where the melted plastic is extruded from, and an extrusion drive system that feeds plastic into the hotend.

They also feature three-axis movement, which is usually done with stepper motors. 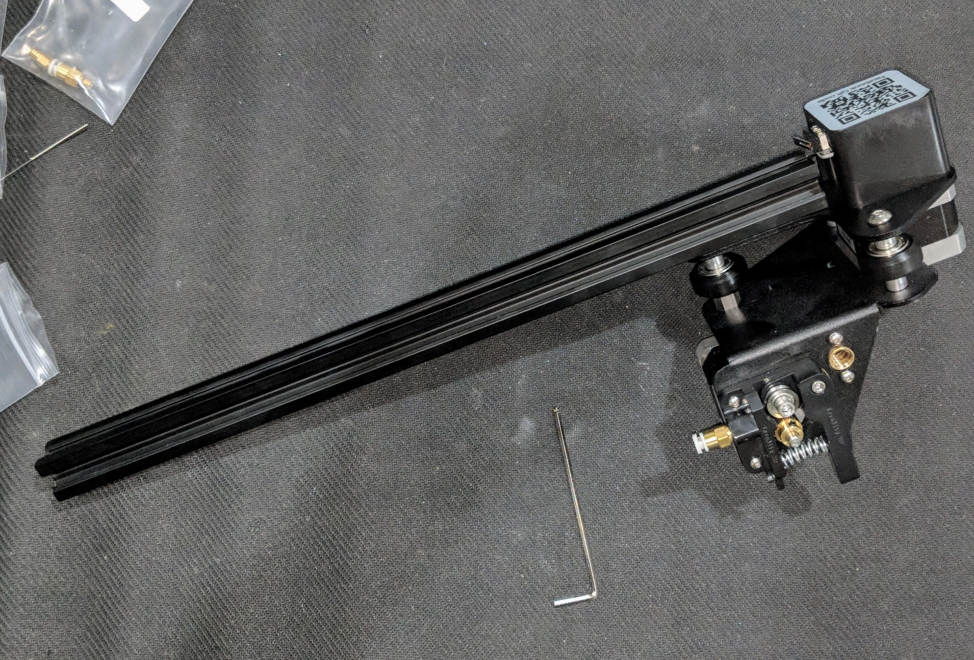 While the printers are marvels of affordable technological sophistication, they’re useless without . . .

One of the best things about FDM printing is the huge variety of plastics you can print with. Many different types of thermoplastics can be printed with a capable FDM printer.

FDM printers consume plastic in the form of filament, a long string of plastic wrapped around a spool. The printer feeds the plastic in slowly as it prints a part. The most popular types of plastic for gun printing tend to be one of four types: PLA, ABS, PETG, and Nylon.

One thing to note is that most filaments are hygroscopic – meaning they adsorb water from the atmosphere. For PLA and ABS, this usually isn’t a big deal unless you leave your filament sitting out for months in a humid room. For PETG, and especially for nylon, even a day or two of sitting out in a room can cause them to soak up enough water to cause issues when printing.

Luckily, you can dry filament out using a standard kitchen oven. Set your over as low as possible (under 180F ideally) and let the spool sit in the oven for 6 to 24 hours.

PLA is a cheap, easy-to-print polymer that has become a mainstay in 3D printing. It exhibits good strength, high stiffness, but it has a very low melting temperature. Sitting in a hot sunlit car can cause PLA parts to overheat and deform.

Additionally, very hard use of PLA-printed parts in guns can overheat them if they aren’t allowed to cool. I did a 150-round dump in a GLOCK 17 frame printed in PLA and the heat radiating from the chamber melted the recoil spring seat.

That said, I had over 1500 rounds on that frame and most people will never do a 150-round dump. PLA parts will last long term if they aren’t pushed past their limits. My personal favorite PLA is eSun’s PLA+. It runs about $25 a kilogram. A roll of eSun PLA+ filament. ABS is a very common polymer. It’s what LEGO bricks are made of and is found everywhere from plumbing supplies to car interiors.

ABS, though, is quite tricky to 3D print as it has a high warp factor. As it cools, it tries to curl and shrink. However, ABS is quite strong. It’s a little more flexible than PLA, and has a much better resistance to heat than PLA.

ABS is a great choice for things like AR-15 lowers, which need a little flexibility to function long-term in polymer. I like IC3D’s ABS – it runs around 30 bucks a kilogram. A roll of IC3D ABS filament. PETG is another common polymer. Its blends are found in things like water bottles and milk jugs. PETG can be tricky because there are many different blends sold as PETG by the different filament manufacturers.

Some PETG is more flexible than ABS, some is less. Some PETG is brittle, some is soft. However, PETG is generally as strong as ABS and has a lower warp factor, while still having comparable heat resistance to ABS.

My experience with PETG is somewhat limited, but I had good success printing a Warfairy Charon AR-15 lower in Polymaker’s PETG, which ran me around $30 a kilogram. A roll of Polymaker PETG filament. Nylon is another polymer with a lot of different blends. For 3D printing we’ll just look at low-temp nylon alloys and high-temp nylons.

Low-temp nylon allows, such as Taulman 910, can be printed on a stock Creality Ender 3. It is strong, flexible, and very well suited to printing AR lowers. 910 has a little bit of warp, but not near as much as ABS and runs around $35 a kilogram.

High-temp nylons are the top shelf for gun printing on consumer printers. While even stronger filaments exist, they require printers outside the price range of most consumers.

High-temp nylons can’t be printed by stock Ender 3’s. For that, the Ender 3 needs an upgraded hotend, such as the MicroSwiss all-metal hotend, in order to handle these nylons. That will run you about $65.

My favorite high-temp nylons to use are DuPont’s 3D printable Zytels. DuPont specially formulated its flagship nylon blend for 3D printing, and the results are amazing…very strong parts, low warp, and easy printing.

DuPont offers a Zytel that has 33% glass fiber fill – this is my personal favorite filament. While DuPont’s filaments cost about 100 bucks a kilogram, their strength and longevity make it worth the price. A roll of DuPont Zytel filament. With a background in filament, now let’s look at what a kilogram of filament actually gets you. About $100 for a kilogram of Zytel sounds steep, but that kilogram can print eight or nine GLOCK frames (depending on your exact print settings). That yields a cost of around $12 for each GLOCK frame.

While its strength will be a little below an OEM injection-molded GLOCK frame, Zytel frames are strong enough to use long term, even as carry guns. I’ve carried the glass-filled Zytel frame GLOCK G22 above for several months and it has taken its fair share of bumps and knocks over that time. That and over 900 rounds of practice fire…it still holds up just fine. There are some notable limitations to 3D printed guns. Some parts, depending on their design and uses (be they receivers, frames or otherwise) simply don’t lend themselves to printing.

FAL receivers would be nigh-on impossible to print with an FDM printer. Barrels can be printed for calibers like .380, but they only work for a short time. Bolts and breech faces lack the mass and strength to hold up long term when printed in polymer.

In this way, 3D printing isn’t a universal solution for the home gunsmith. This is simply a new, cost effective tool for some aspects of home gun making.

Turning out receivers for things like AR-15s is simple and parts like AKM receivers and GLOCK frames lend themselves well to being printed along with using simple metal parts on wear surfaces such as slide rails or bolt carrier rails. A look at the simple metal rails screwed into the 3D printed AKM receiver to give it wear-resistance where the bolt carrier travels. (Courtesy Ivan the Troll)

In the next article in this series, we will touch on how to get started printing guns yourself, talk about the current state of printable guns, and showcase how 3D printers can be used to print tooling and jigs for other aspects of gunsmithing.

Read Part 2 in this series here.

DIY Guns, Part 1: An Intro to Modern 3D Printing and Making Your Own Firearms at Home