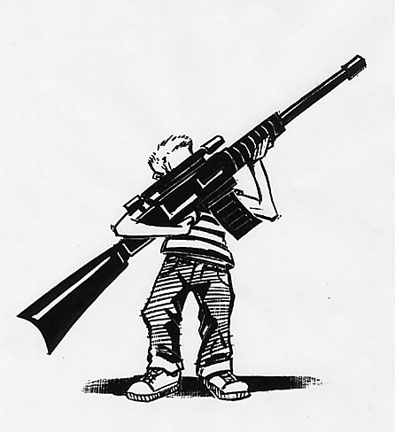 Like a large segment of the population, I’m a divorced dad. Not by choice. But one of the things you learn in divorce is that you don’t always have a choice. This weekend was “visitation weekend,” that once- or twice-monthly ritual that single parents go through to see their kids, when they live a-ways away from their children. Because of the distances involved, that means a road trip, with a side order of kid involvement. Bring on the gun education!

Because of my trek to take care of my father, I’ve been on an extended visit to Shreveport. Flying my daughter in from Amarillo takes some doing. To avoid the high cost of flying into Shreveport (trust me – it’s unbelievably expensive) and/or having my 12-year-0ld change planes, the solution is a 3-hour drive to Dallas, meeting her plane at Love Field in Dallas. When she visits here, that means two days worth of 6 hour car trips. Since I have older vehicles, I think it prudent to travel with a gun, just in case.

Do I expect to get carjacked? Nope. Nor mugged, robbed, or murdered. But that’s not the point. The point is to be prepared for any contingency. The Boy Scout in me says “better to have it an not need it, than need it and not have it.” So I carry. But there’s a difference in carrying when you’re alone, and when you have a tweenager along for the ride.

Carrying a gun is an awesome responsibility. The minute I take a gun out of my home, I’m automatically in “Condition Yellow,” constantly thinking about things like concealment, keeping the gun secured, and keeping it safe to prevent any accidental discharges. Take that awareness, and factor in “now I’ve got a kid (or kids) in my car,” and you’ve got a recipe for keeping you up at night.

I’ll let you in on a dirty little secret. I don’t agree that the solution to keeping kids safe are trigger locks, safes, or keeping the gun and ammo well away from each other, when you have kids around. Like most things in life, education is the key. Now my daughter is remarkably adult and mature for her age. She’s also 12 years old. Which means that I have to deal with this weird mix of totally responsible behavior from her, peppered with the occasional moment when she acts her age. I also have to deal with securing firearms when her friends come a-callin.’ That means making a large number of compromises, and frankly prevents me from being able to relax in my own home.

Ideally, I’d like to have at least one gun in each room in my house. With no kids, that would be a slam-dunk. All I’d have to worry about would be keeping the weapons hidden or secured to insure against theft in case of a break-in. But with a child in the house, it takes my level of responsibility up several orders of magnitude. The easy way is to keep the guns in portions of my home that are inaccessible to kids. That’s part of it. The other part (at least when it comes to dealing with my own child) is to make sure she has a clear understanding a respect for every gun in the house.

Keep in mind, we bought my daughter a Ruger 10-22 a few years ago. She’s actually a pretty good shot. And that experience has given her some confidence and comfort around guns that, sans practical experience, she simply wouldn’t have.

Some people are aghast that I would take my child to a range. They believe kids should not be exposed to guns at all. After all, guns are evil, right? Nope. And the best way to get kids to understand and respect the power (and yes, danger) of guns. The NRA has a program they call “Eddie Eagle” – one that educates young kids about what to do if they find a gun. For the record, their program teaches kids to A) not touch the gun,  and B) go tell an adult about it. As incredible as this sounds, groups like the Brady Campaign have come out against this program. (To my mind, that’s akin to crucifying the electric company for teaching kids to avoid downed power lines and to report it to 911.)

I’m a big believer in the Law of Unintended Consequences. And lemme tell ya, she’s a bitch. You can have all the good intentions, logic, and reason you like behind you, and those Unintended Consequences will rise up and bite you in the Alice B. Tookas, every time. Teach a kid to be afraid of guns, and sooner or later, that fear will transmogrify into fascination, and in time, fascination will beget obsession. Remember, there are some people that just have to touch the stove to understand that fire burns.

My theory is that if my daughter understands guns, she won’t be either afraid, nor will she be curious about them to the point where she ever attempts to satisfy that curiosity on her own. So we have a few rules in the Casa de Kozak.

That may sound like a lot of info for a kid to process and retain. Trust me, if you’ve helped them with their homework lately, that’s nothing. And I can also tell you that taking her to the range on a regular basis has turned my daughter from someone who was afraid of guns (and the loud noises associated with them) into someone who is comfortable around guns.

So back to the road trip. We’d planned three trips – one for me to pick her up, one to take her back, and a third on Saturday, driving to Marshall, TX, for a gig I had to play. The Saturday trip as planned would have included a neighbor friend of my daughter’s along for the ride. When I have my daughter in the car, I feel comfortable having the gun secured in a car holster. Had the neighbor’s kid come along for the ride, I would have gone with conceal carry, largely because while he and his dad go hunting regularly, I’m not familiar with the boy’s level of knowledge about handguns. I’m sure he’d be fine with it, but I don’t chances with handguns.

On the way over on Friday, I picked up my shotgun at a repair shop. That meant when I got my daughter in the car, she was greeted by the sight of my shotgun sharing the back seat with her luggage. It barely merited a comment, much less so much as a raised eyebrow.

So, all in all, the trip was a non-event, gun-wise. Which is what I expected, and as it should be. And had it not been, I would have been ready for a number of situations that would have been less than optimal. As for me, I’ll take dull and boring, when it comes to self defense, every day of the week.