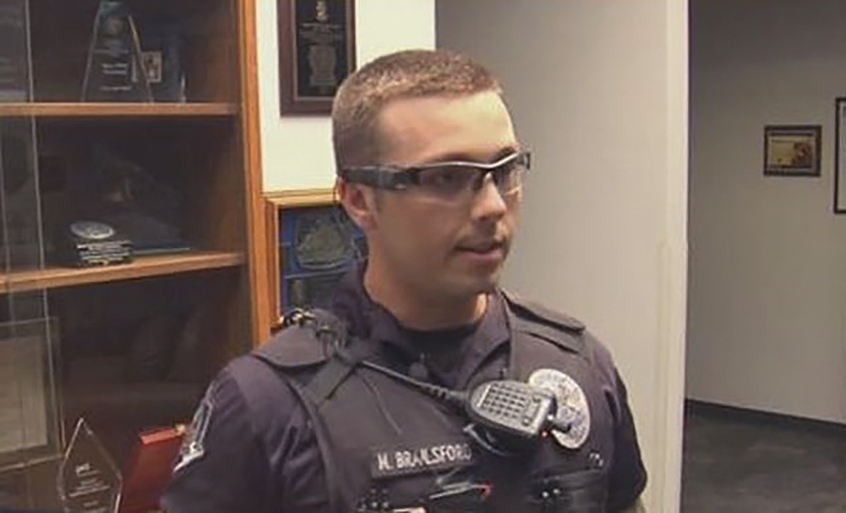 “The Mesa [Arizona] police officer charged with second-degree murder for an on-duty shooting in January pleaded not guilty during his first court appearance Tuesday,” tucsonnewsnow.com reports. Officer Philip Brailsford [above] was released without bond. ‘He is not a danger to the community,’ Craig Mehrens, Brailsford’s attorney said. ‘He has honorably served the community as a Mesa police officer and he was honorably serving the day he received the call [to the shooting scene].'” Yes, well . . .

Attorneys for the victim, Daniel Shaver, argued Brailsford was malicious during the shooting and raised questions about the gun used.

The Maricopa County Attorney’s Office said Shaver was on his hands and knees when Brailsford shot him five times inside a Mesa hotel. The gun used was a personal AR-15 assault weapon that had been approved for service use by the Mesa Police Department. However, Mesa police noted that their investigation of the shooting turned up a vulgar inscription on the rifle that doesn’t meet department policy.

“Inscripted on the officer’s gun, and I hate to use profanity, but it said, “you’re f*****,”’ Laney Sweet, Daniel Shaver’s wife said.

“That statement tells me this is a person who’s enthusiastic about killing people,” Marc Victor, lawyer for Sweet and her late husband, argued. “That’s what that inscription means.”

So, it seems that those aggressive gun inscriptions can and will be used against you in a court of law, as some have warned. My advice: just as you shouldn’t have a tattoo where a judge can see it, don’t go all Molon Labe on your firearm. Still, freedom of speech and all that. Right?

UPDATE: Despite the prosecution’s best efforts, the inscription on Officer Brailsford’s rifle was ultimately ruled inadmissible.