I never really got on the 10mm train. Sure, I’d read the articles and knew all of the history. The 1986 Florida FBI shootout. Colonel Jeff Cooper. And the cult gun of all cult guns, the Bren Ten. It really is a fascinating cartridge development story, and a novel concept: chamber a near-magnum power level handgun cartridge in a semi-automatic pistol platform.

But I grew up a Montana farm and ranch kid who also spent a fair amount of time in the mountain backcountry. And out there, you carry a large caliber magnum revolver. Period. I’ve owned a .357 magnum and a .44 magnum revolver (both S&Ws, thank you very much) since I was legal, so I really didn’t have a use for a 10mm semi-auto.

Fast forward a few years and a few handguns later…and the 10mm started to intrigue me. Articles are legion. The 10mm is revered in hushed tones. Word is that only Zeus’s lightning bolt hits harder than the 10mm.

Then my brother got himself a GLOCK G20. And a good friend landed himself a Colt Delta Elite. 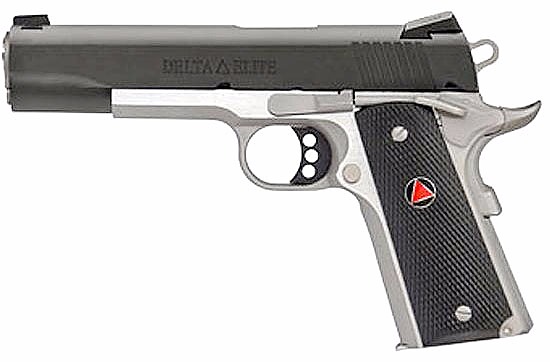 Both loved them and continue to the virtues of the Blessed Ten. I convinced myself that it was a niche I needed to fill.

Any excuse to buy a gun, right? I got the opportunity to purchase a Gen4 GLOCK G20 for a decent price, so I did. I’ve always struggled shooting the large-frame GLOCKs well, but I carried it a little and appreciated it for what it was: a lightweight, simple platform holding 16 rounds of near-magnum powered cartridges.

Then I watched this:

As a serious handloader, this was something I’d always feared about the 10mm cartridge in the GLOCK platform: you have what is basically a high-pressure magnum revolver round, being fired in a polymer framed pistol (which, in and of itself isn’t that big a deal), without a fully supported chamber in the GLOCK barrel.

My G20 went down the road, and I went on through life without a 10mm. Then, fortune smiled and in the midst of a high-powered gun trade, I ended up with an excellent condition Smith & Wesson model Model 1006.

This pistol, along with a few variants, was built from 1990 to 1995 and is known as a “third generation” S&W autopistol.

The 1006 is a full-size, all stainless steel pistol with a 5-inch barrel. It utilizes a single stack magazine holding nine rounds, which makes the pistol easier to grip for those of us with short fingers.

My 1006 came equipped with a Novak rear sight and a drift-adjustable white dot front sight. The pistol was also manufactured with an adjustable rear sight, which was protected by tall “ears” (as were other 3rd generation S&W autopistols), such as the example shown here: Along with the full size model 1006, which is a 5” barreled, exposed hammer, DA/SA with a slide-mounted decock lever, S&W also came out with a range of other 10mm variants: The 1066, a 4” barreled, hammerless, with slide mounted de-cock lever. This is the pistol that was designed for and awarded the FBI’s short-lived 10mm pistol contract. 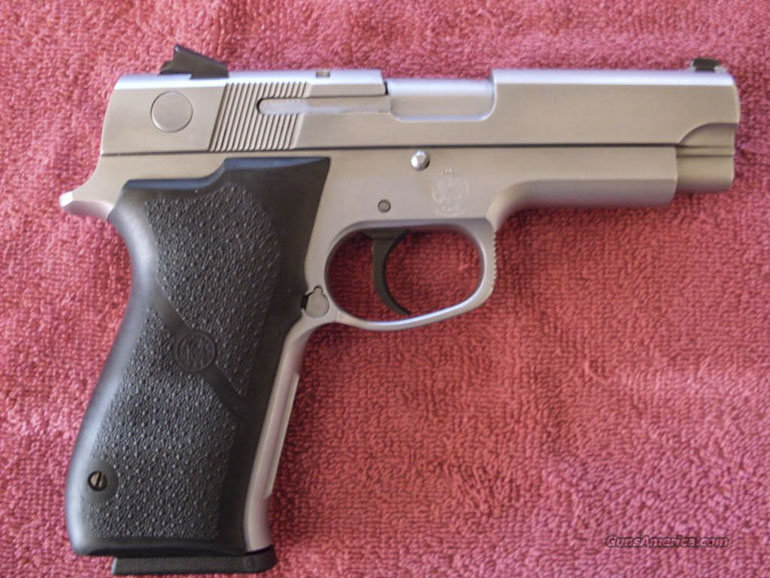 And then there was the 1086, a 4” barreled, double action only pistol.

All of these S&W 10mm pistols use the same single stack, nine-round magazines. Fun fact: these S&W 10mm mags are made of pure gold. OK, not really, but they are priced like they’re gold.

These damn things are STUPID expensive to buy. My 1006 came with two magazines, but like any good pistoleer, I wanted some extras. So online I went. The cheapest I could find in used magazines was two for $120 on Gunbroker. Nothing on Midway, Brownells, CDNN, etc. So, I guess I’ll make do and hope nothing happens to the 2 magazines I have. 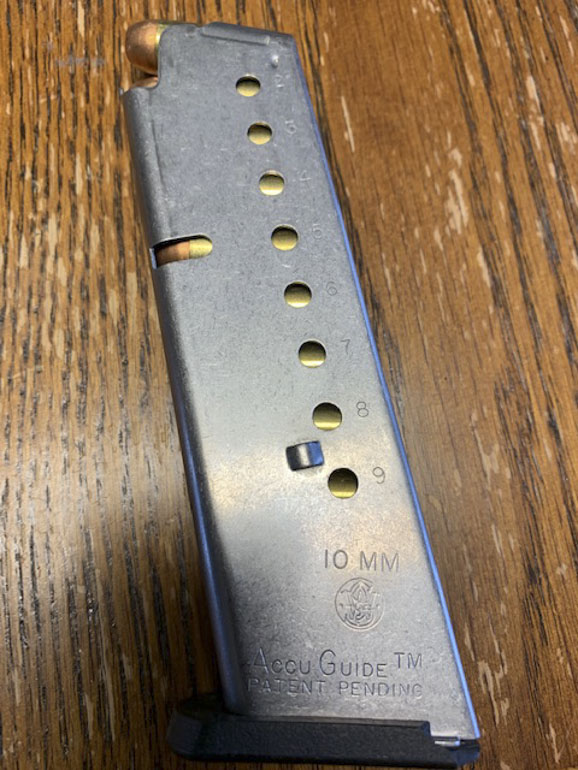 The Smith & Wesson 10mm magazine, aka GOLD. These things are not cheap. (Courtesy Austin Knudsen)

The 1006 is large and heavy. This brute of a handgun can be used as an effective blunt object in the event you shoot it dry and don’t have a reload. But for a cartridge like the 10mm, weight and strength is a good thing.

Don’t get me wrong, I love me some 1911’s, but the platform must be properly sprung to handle the 10mm, and the cartridge still has a reputation for wearing out 1911s. Similarly, there are LOTS of examples out there of exploded GLOCK 10mms and .40S&Ws. Not so with the Smith & Wesson 10mms.

The 1006’s chamber is fully supported, the barrel is surrounded by a stainless steel slide, and mated with a fully-railed stainless steel frame. Simply put, the S&W 1006 is “hell bent for stout,” and to my way of thinking is the ultimate 10mm reloader’s pistol.

This thing should withstand any published 10mm handload you can put through it.

The downside to all the 1006’s beef and brawn is all that weight is no fun to carry. The pistol weighs in at 38 ounces, which makes it just slightly lighter than a 4” barreled S&W model 629 revolver in .44 magnum. Add in 10 rounds of ammunition, and the 1006 becomes even heavier. When you carry the 1006, you never forget you have it on. These large frame S&W autos were often seen on TV carried in a shoulder holster, but I hate shoulder holsters, so I set about trying to find a belt holster for mine. Holsters for these large third generation Smith & Wesson’s aren’t impossible to find online, but they aren’t exactly plentiful either. I got lucky and after rummaging through my tote full of holsters, I found an Old World leather belt holster that I bought decades ago for a 1911 or a Hi-Power. The thumb strap wouldn’t fit around the 1006 far enough to snap in place, so I wetted it, worked it a little, and stretched it over the pistol and into the snap.

I then left the holster and pistol like that for a few days and let the leather dry. Now I at least have a functioning belt holster for the 1006. It’s not something that I’d use for concealed carry, but let’s be honest: I’m not going to conceal carry this cannon. This rig is more of a general, carrying in the field holster which is precisely what I was after.

Anyhoo, I got my 1006 all set up, and promptly put it in my safe and ignored it for a year. I had recently been doing some accuracy testing on a few other handguns, and one afternoon I looked up on my shelf and noticed that I had two untouched boxes of factory 10mm ammunition: a box of Remington 180 grain FMJ, and a box of HSM 200 grain FMJ.

I decided it was finally time to see what the S&W 1006 could do. I fired two five-shot groups at 25 yards. I was seated with the pistol resting on a shooting bag. A sixth round was loaded into the magazine, so as to maintain consistent pressure on the bottom of the chamber throughout testing (if you believe in such things).

As I was shooting for groups, I opted not to fire the first shot double action (as intended with this and all DA/SA pistols). Rather, I fired all shots single action. The 1006 loved the 200 grain HSM load, and almost made my heart stop when the first three shots piled up in the three shot group you see here. Two slight flyers opened the group up a little, which can be attributed to my own stage fright and anxiety at such an amazing first 3 shot group. In any case, a one inch, 5-shot group at 25 yards. I have no doubt that in a Ransom Rest, the 1006 and this load would have torn small, ragged hole.

The Remington 180 grain group, while still certainly acceptable, wasn’t as exciting as the HSM 200 grainers. A decent one-inch four-shot group, spoiled by one flyer (the 3rd shot) that opened the group up to just under two inches.

Bottom line: this sumbitch shoots. The S&W 1006 genuinely startled me with its accuracy. 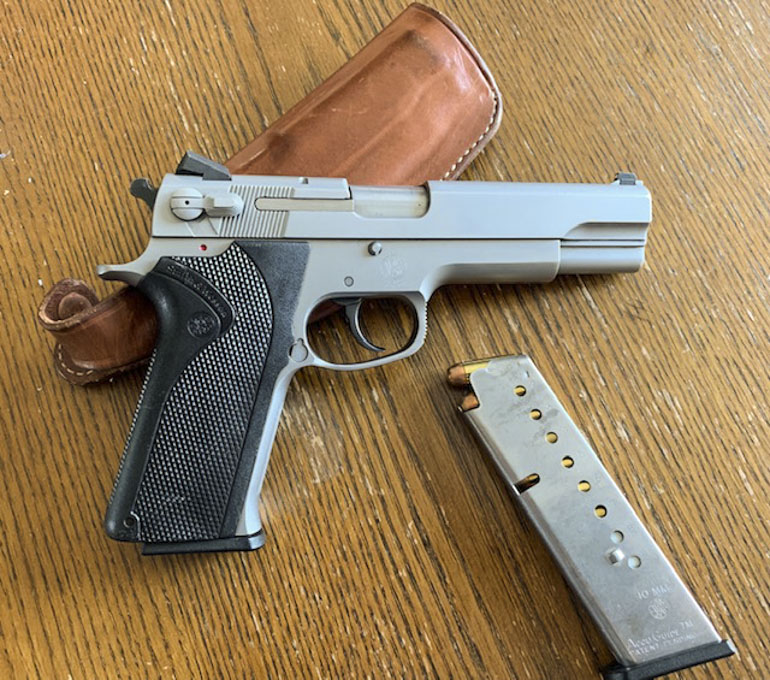 I’ve done enough of these reviews on service 9mm semi-autos that I rarely see sub-2 inch accuracy. And with the 1006, I did it while barely trying.

The single action trigger, while a little heavier than I would have preferred, breaks cleanly and is very useable. Recoil is more than manageable due to the weight of this pistol.

More testing is needed and I’m itching to try some reloads in this thing. Colonel Townsend Whelen said, “Only accurate rifles are interesting.” The same applies to handguns, and I suddenly find myself very, very interested in the Smith & Wesson 1006.

Ergonomics * * * * *
While double stack third generation S&W autopistols (like the 5906, 915, etc.) feel strange in my hand, the 1006 does not. The grip on the 1006 is certainly longer front-to-back compared to other designs, due to the length of the 10mm cartridge. But it’s not uncomfortable and the single stack magazine keeps the grip circumference manageable for those of us with short fingers. No sharp edges are present, and the trigger guard is nicely undercut. While I’m not a fan of DA/SA de-cocking pistols in general, the 1006’s de-cocking lever is easy to reach and intuitive to operate.

Cosmetics * * * * *
The 1006 looks great. I love satin finished stainless which gives the 1006 a serious, pure business look. Mated with the black Delrin (plastic) grips, the 1006 looks like it belongs in a law enforcement officer’s holster.

Accuracy * * * * *
Again, I was stunned by the 1006’s accuracy. This is a level of accuracy I’ve only ever been able to achieve shooting revolvers. In the last few years, I’ve accuracy tested a LOT of service semi-autos, many of which ended up published on this website. The S&W 1006 is hands down the most accurate semi-auto pistol I’ve ever fired.

Trigger * * * *
The double action pull is long, but smooth with some stacking before it breaks. I deduct a star here only because the single action trigger is a little heavier than I would prefer.   However, it breaks cleanly, is consistent shot to shot, and honestly the trigger pull weight is probably appropriate for a duty or field weapon. As the groups attest, the single action trigger allowed for excellent bench shooting. Aside from the barrel, the trigger is the most important factor in a firearm’s accuracy, and the 1006’s trigger was pretty good.

Reliability * * * * *
I had no reliability issues with the 1006 so far. I’ve only put a few hundred rounds through it, and no hollow points or lead. Yet.

Overall: * * * * ½
I was happily surprised by the Smith & Wesson 1006. I’m a little sick in the head, and I enjoy big bore guns that kick hard. But the 1006’s weight and size tames the recoil of the mighty 10mm. The trigger, while a bit on the heavy side, was clean and consistent, which allowed me to fire some exciting groups. I’m really looking forward to experimenting with various hollow point and hard cast lead bullet handloads in the 1006. Weight and size are issues with the 1006, and honestly I don’t see it taking the place of my big revolvers in grizzly country. But this might be the ultimate platform for the 10mm cartridge. If you can find one, the S&W 1006 is highly recommended.