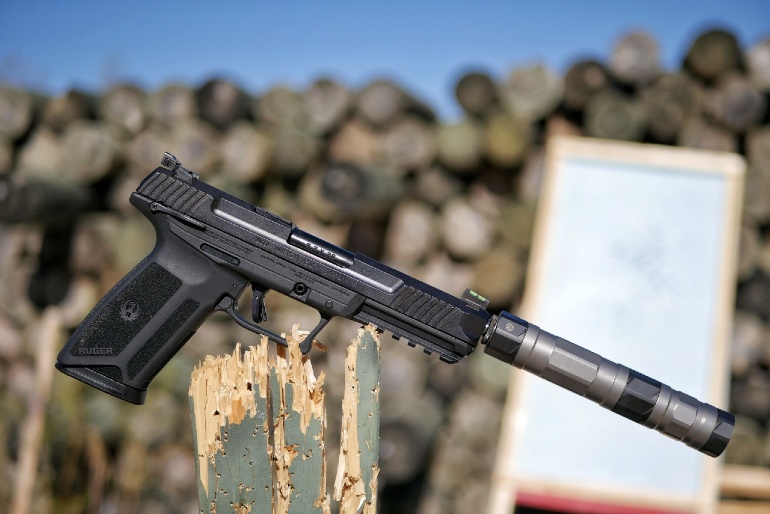 When Ruger launched the Ruger-57 a year ago (TTAG review HERE), we were taken quite by surprise. Nobody foresaw this FN Five-seveN competitor coming, but it was a great news for fans of the 5.7x28mm cartridge who are interested in a more affordable, more approachable way to fire the little hot rod round.

The only issue with the Ruger-57…mo threaded barrel option. And I do love me some suppressed pistols. So, it was off to Morgan of Class 3 Machining just outside Dallas . . . From prototyping and barrel modification for Black Collar Arms projects to various personal jobs like this Ruger-57, I’ve sent a decent amount of work to Class 3 Machining over the past couple of years.

Whether chopping down a barrel to a shorter length and then threading it for suppressed use, extending and threading it, or making other physical changes, the parts have always come back with gorgeous machining and finish, meeting and exceeding expectations and requirements.

Class 3 Machining specializes in turning whatever firearm or barrel you may have into a suppressor-ready model, and they do great work. In the case of the Ruger-57, the barrel is too small in diameter to thread in the standard 1/2×28 thread size required for typical 5.7×28 suppressors. Morgan’s solution was to treat this barrel in the same way as many .22 LR pistols are designed from the factory: thread it to a smaller size and use an adapter to bump it up to 1/2×28 from there as well as to lengthen the barrel so the threaded section extends in front of the slide. In this case, he simply used a Walther P22 thread adapter. The adapter mates up securely to the crisp, square shoulder that Class 3 Machining cut into the factory barrel and is placed in just the right position in front of the muzzle. The thread adapter provides a nice shoulder of its own for securely mounting a suppressor. In this case, I ran a SilencerCo Switchback from Silencer Shop (TTAG review HERE). Overall a pretty clean look that precisely matches both the form and function seen from the factory on nearly all .22 LR pistols that are sold with a threaded barrel.

[On some mobile browsers the Rumble video embed may not work. Click HERE to watch the video if you see an error bar above.]

With 5.7x28mm ammo incredibly scare right now I was stingy on my range outing, but in the video above I think the results speak for themselves. The Ruger-57 ran confidently and with complete reliability. And it sounded great!

Backpressure from the silencer resulted in high slide speed, as witnessed by ejecting brass cases entering low earth orbit as they whizzed and whistled off into the distance. While the Ruger-57 does have some delay built into its action — it isn’t a totally straight blowback system, but it’s close — it isn’t enough to keep the slide speed within normal range and there was a noticeable, though not terrible, amount of gas blowback happening.

I’ll be on the lookout for a stiffer slide spring, which should put a very appreciable dent into both of these side effects of slapping a suppressor onto the gun. No regrets, though, as there isn’t a day where I’d choose the noise of shooting the Ruger-57 unsuppressed over feeling a little puff of gas on each shot.

For my next trick — ammo depending — I’ll see how she sounds with the short module of the Switchback removed (which will reduce backpressure some) and then, perhaps, will see if she’ll run with a lightweight 5.56 suppressor installed (additional internal volume may decrease backpressure, and the added weight may or may not slow down the action…if it still cycles). Whether you have a pistol, lever gun, SMG, hunting rifle, or something else entirely and it doesn’t have a threaded barrel (and likely there also isn’t one commercially available), but you really want to shoot the dang thing suppressed, you’ll want to hit up Class 3 Machining. From “simple” threading jobs to shortening a barrel before re-crowning and threading, they can do it and they do it extremely well.