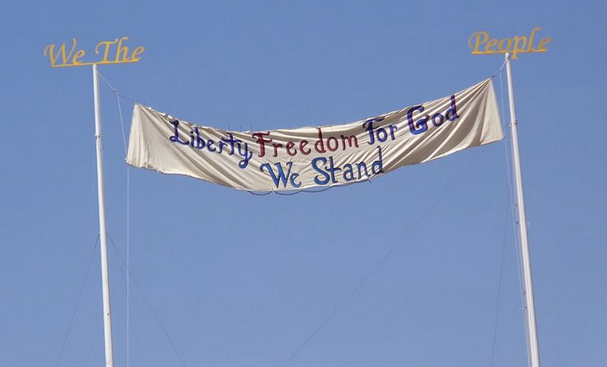 No question: the “standoff” at the Bundy Family Ranch in Nevada is growing more tense with each passing hour, as media and militia pour into the area and the feds tool-up for an old-fashioned confrontation over grazing rights and cattle. It must be said (and was, kinda by our man Hyde earlier): the Bundy family is doing nothing to calm the situation and much to roil it. Earlier today, the Bundy family suggested the feds may have cut cell tower service to disrupt communications amongst their supporters. Now this from The Bundy Ranch’s Facebook page . . .

Ryan Payne one of the Main Militia who has been here protecting Cliven has reported it was HIS brother in law who reported the confiscating of weapons. This has been confirmed by Militia. If this happens to anyone else please call us or put it on blast, if you can get pictures, please do! Thank you for your support everybody!

We’re looking into it. IF – and that’s an all-caps IF – the feds are grabbing guns from Americans intent on defending the Bundys, the stakes in this conflict will be raised to ridiculous heights. As for whether or not the rancher’s beef with the feds over grazing rights is a just cause per se, let’s just say that’s not a hill I’d die on. Let’s hope no one does.