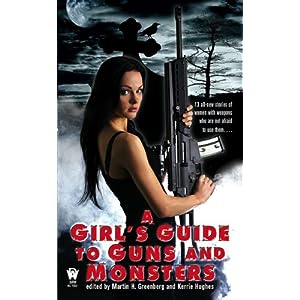 On my way back from Dallas, I had to pull over for a pit stop at one of the many truck stops that pepper I-20. Like many of today’s trucker’s tabernacles, this particular one featured not only petrol, but a cafe, a fast food counter, an (in)convenience store, and the like. (You ever check out the prices in those places? Sometimes I think it would make more sense for the sales clerks to wear the masks. Sheesh.)

As I was standing on one foot and then the other, waiting for someone willing to tally my purchases, a paperback caught my eye. It was not (just) the comely nymph holding the oversized phallic rifle on the cover. No, it was the title that grabbed me: A Girl’s Guide to Guns and Monsters. So I picked up a copy (at the truck stop’s “popular prices,” no less.) I thought, “with a title like that, how can I go wrong.”

Turns out, the book is a baker’s dozen of stories about strong women, a variety of weapons (including, but not limited to firearms), and supernatural bad guys. One of the editors, in her foreword, explains that she was inspired to collect these stories by fighting some demons of her own, particularly as she is a rape survivor. So far from being a pulp fiction collection of T n’ A n’ Glocks and guts, it’s actually an assortment of stories that feature strong women who aren’t afraid to kick a little bad guy butt.

Each story is set in a particular chronological time period. The first story’s set in the days of the Wild West, with the last set in outer space. Like most pulp short stories, you trade richly-drawn characters and subtext for action, action, and more action. Which is just fine with me. When I’m indulging in escapist fare, subtleties of character and nuanced plots are not high on my list of priorities.

So how do the stories stack up? Well, I’d intended to read one per night. After reading four, I realized why I don’t read pulp fiction very often. It’s addictive. Not good, mind you. But addictive. There’s something about the idea of stories with a tempo de bat outta Hell that just make you wanna keep reading, logic, writing quality and need for sleep be damned.

Of the four that I read, the writing was of acceptable quality, but I don’t think any of these authors will be quitting their day jobs any time soon. But the stories were fun. As a guy, there’s something to be said for stories that feature strong women. I’m more than happy to play the knight in shining armor, but I’d much rather do my ass-kicking along side a strong woman.

So far, at least, these stories focus on the strong women, and omit any mention of heroics by strong men. That’s okay. I get it. But if you’re into action, weapons, strong women (and hey – it’s a book…you’re mind’s eye can trick them out as whatever babe melts your butter), you can’t beat a cheap paperback for a few hours of escapist entertainment.