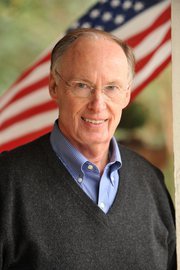 “I have ordered the AL Department of Transportation to remove signs banning weapons at all Alabama rest stops to comply with state law,” Gov. Robert Bentley announced Friday on his Twitter feed. The face-saving announcement comes on the heels of a series of Yellowhammer News reports that in turn inspired pledges from gun rights advocates to defy unlawful citizen disarmament rules enacted by unaccountable bureaucrats.

Prominent among those pledges was a letter to ALDOT Director John Cooper, shared by “Three Percenter,” journalist and smuggler Mike Vanderboegh on his Sipsey Street Irregulars blog.

“[I]f you ignore the telephone blitz you are currently experiencing, it will be my honor and my pleasure to lead ‘I Will Not Comply’ armed civil disobedience actions numbering (at least) in the hundreds of participants at every Alabama Welcome Center in the state, as well as in front of your headquarters,” Vanderboegh told Cooper after outlining some of the actions he’s led defying edicts in other states. “So, I hope you save us the trouble and reverse this dangerous and deadly policy.”

Responding to activist outcry, ALDOT flack Tony Harris characterized their objections as “a distraction” from “issues we deal with day in and day out.” He then passed the buck to the Attorney General’s office, Yellowhammer News explained, “to weigh in on whether ALDOT has the authority to implement the gun ban without legislative authorization.”

Widespread defiance when all else fails, such as we’ve seen in states where registration mandates including those disguised as “background check” requirements are ignored, or where magazine bans are enacted,  is something I’ve taken to calling a “new paradigm.” For many gun owners, it is. But it’s not really new. It has a long and proud tradition in defense of liberty and advancement of rights.

It frustrates the hell out of gun-grabbers to impotently watch their demands for widespread enforcement collide with the reality of what that would entail and — and of what it would provoke. Enforcers and administrators who would have to live with the repercussions of such attempts aren’t about to stick their heads on that block.

Gov. Bentley recognized that and eliminated a rule the state has no belly for enforcing in the face of vocal dares for them to try.  Look for that to play out more and more as gun rights advocates begin to realize the power they can wield simply by declaring “I will not comply.”