I fully admit to being a complete and utter nerd. Which explains why the very first thing that went through my mind when I realized I didn’t have anything planned for this past weekend was “Oh sweet! I can go chronograph some ammo!” Some of you may remember my ongoing series where I chronograph commercial ammunition to see which ones are the most consistent. Thanks to the now plentiful supplies I’m finding at local gun stores here in south Texas, I can continue my research. Well, shall we? . . .

Here’s a quick reminder of what’s going on: we run 20 rounds of each brand through a chrony and look at the IQR or InterQuartile Range to get an idea of how tight the group is going to be downrange. There are plenty of other factors in accuracy, but velocity is the only one that’s “clean” enough to calculate and compare (as everything else can be influenced by the shooter, equipment, etc.). For the full methodology check out this article. Just remember LOW=GOOD and we’ll be on the same page.

You may notice that I’ve changed guns again, and I’m doing this on purpose. Some of you have expressed a concern that changing certain environmental variables (the gun, humidity, air pressure, etc) have an impact on the results we’re measuring here. Every time I run one of these tests, I run another 10 rounds of my personal (and ever dwindling) stock of XM193F through the chrono first. This is the same cache of ammo that I used for the very first test, coming from the same lot number, and even from the very same case.

I’m down to my last three boxes, but it’s the same ammo. And every time, the interquartile range of the velocity comes back the exact same. In other words, none of the external factors matter. The velocities absolutely do change — up or down — depending on external factors. We’re comparing this ammo to itself in identical conditions for the entire run. The velocity changes, but the IQR remains the same. Now, on with the test. 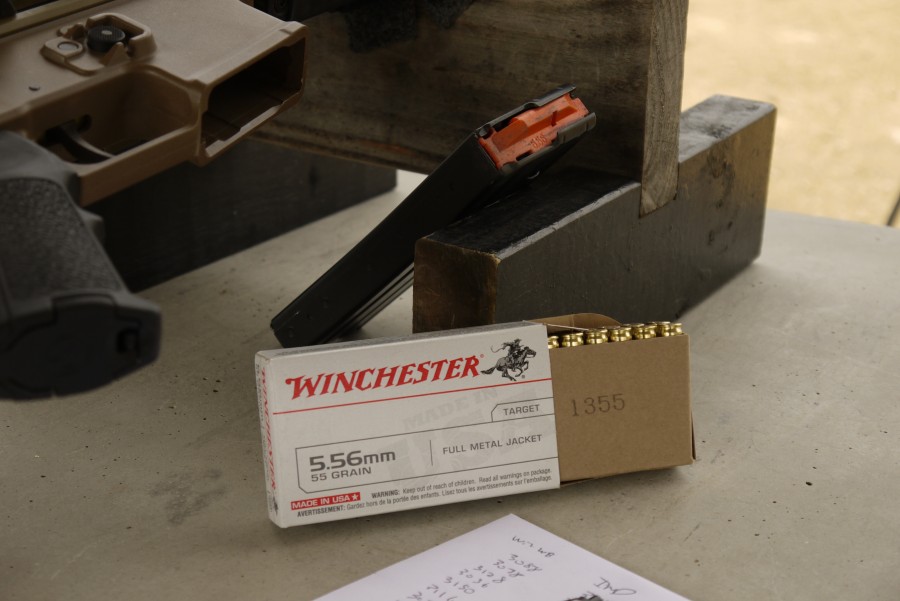 First up is the Winchester 55gr 5.56 ammunition that was generously donated by Winchester to help me practice for the competition shooting season. This is the exact same stuff that you can find by the crateload in your local Walmart or big box store, relatively cheap and (at one time) readily available.

Caveat: testing this ammunition from one of my sponsors presents a definite conflict of interest. But because this test is based on calculated figures and ends in a repeatable and verifiable result, I’m okay with going forward. In short, there really isn’t any way for me to skew the results. The challenger is a brand of ammunition that American shooters have become more familiar with as the ammo shortage has continued: Independence Ammunition. Manufactured in the land of RF’s favorite supermodels and armed schoolteachers (Israel), this imported ammo has often been the only brand available for purchase due to the large quantity that has suddenly appeared on our shores. Available and cheap, the ammo seems to be a welcome change from the overpriced and unavailable name brand ammo. But is it any good?

Just for fun, I once again did a chrony comparison of 5.56 ammo both with and without a silencer. Here’s the boxplot without any normalization (and comparing to the current leader): There it is again — the velocity of the ammunition increases slightly with the addition of a silencer. Then again, on the SCAR, there’s an adjustable gas port that you tune to adjust for the increased back pressure with a can. It’s possible that the smaller gas port might account for the higher velocity, but seeing as the gas is still trapped (unlike the AR-15’s open gas system) it’s not likely to have this level of an impact on the velocity. Cool, huh?

And here’s the normalized plot: The IQR of the “suppressed” Winchester rounds was a bit off, but to be expected since I only fired around 10 rounds instead of the full 20. Speaking of being off, the Independence ammunition not only had a huge IQR but also had the biggest whiskers of any ammo I’ve tested so far. That indicates even more inconsistency in the ammunition than we usually capture with the IQR calculations.

So, what’s the final word? How do these stack up against the other ammo we’ve tested? What I find interesting is that the IQR for the 55gr version of Winchester’s 5.56 ammo matches up almost exactly with the IQR of their 64gr variety. That 64gr test, by the way, was conducted in a completely different climate with a completely different firearm. In fact, it was the first test we ever did. So, (A) nice to see some validation for our assumptions and (B) interesting that ammunition from the same factory and of the same price range is roughly equally consistent.

Here are the latest charts. Keep in mind that prices reflect the actual price per round at the time the ammunition was reviewed. I’ll be going back through and re-researching all the ammo again shortly, as soon as things calm down a bit more. Stay tuned, I’ll have some more .308 ammo coming up later this week!