SIG SAUER has released some of the most innovative ammunition to come to market in recent years. Instead of going wild with expensive materials and processes, they decided to improve upon excellent, existing technology and apply it in creative ways. The V-Crown bullets are one of the best (maybe the best) traditional JHP bullets on the market today. In the course of my testing with the SIG V-Crown line, I have yet to have a failure to perform. Today we are taking a look at perhaps the best thing to happen to the .44 Special since the Keith hardcast was developed: the SIG SAUER 200gr Elite V-Crown JHP.

In a surprising move, SIG put a significant amount of engineering power into the relatively uncommon .44 Special cartridge. The result is what may very well be the best all-around .44 cartridge made for general use today.

SIG sent me this statement on their excellent ammo:

“Sig Sauer V-Crown Revolver products are fully compatible with all known Revolvers, Bolt Action Rifles, and Lever Action Rifles in a given caliber. However, terminal ballistics are optimized for the lower kinetic energy levels that are inherent in shorter barrel platforms. For 44 S&W SPL and 44 Rem Mag this means barrels in the 2.5” to 5.0” range. This is not to say that terminal ballistic performance may not be excellent with some longer barrel platforms just that this was not the design intent of the product.”

Of interest to me is the overall length of this cartridge. I’m very much an ‘ammo guy’, probably more so than I am a ‘gun guy’, and have played around with loading my .38 Special cartridges, among others, longer than standard to see what happens. SIG loaded these rounds to about the same overall length as the slightly longer .44 Magnum, which no doubt helps this round with reliable cycling in a bolt or lever action, as well as aiding in accuracy in a revolver. The individual rounds also just look so cool. 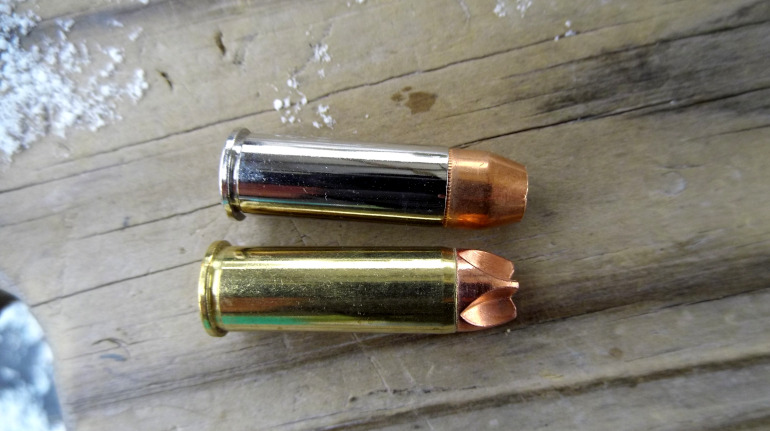 I tested this load in a Smith & Wesson Model 69. This is a relatively new revolver chambered in .44 Magnum, although it is also able to fire .44 Special. I have put this gun through rigorous testing and have a very good impression of what it is able to do. I believe that the gun is best with .44 Special and light .44 Magnum loads, as the revolver lacks the mass to make it comfortable and controllable with anything on the upper end of the power spectrum.

This gun was fired with the SIG load at a distance of 25 yards for accuracy off the bench. I achieved five-shot groups measuring an average of 2.5”. This was great performance considering the short barrel and sight radius. Close range groups were much tighter. 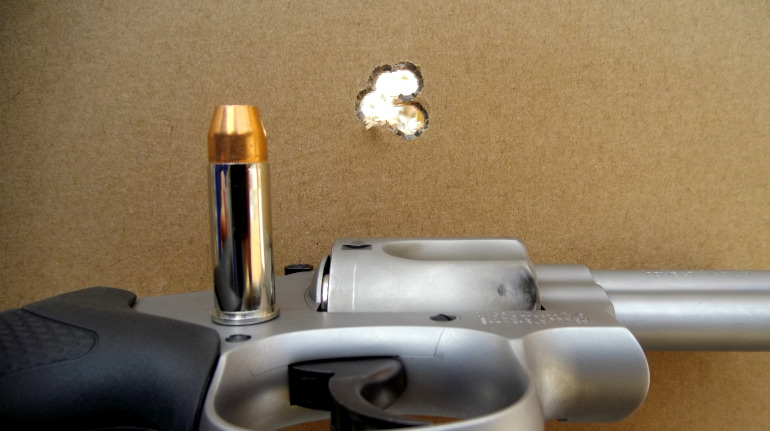 Velocity for this load was tested over my Oehler 35P chronograph at a distance of five feet from the muzzle. Average velocity was 798fps.

I received a 10% FBI gel block from Clear Ballistics for this section of my testing. The rounds were fired into the gel at a self-defense distance of twenty feet.

The mild recoil would make you think that this round would simply bounce off a bad guy, but that is hardly the case. Penetration in bare gel was deep, with rounds passing completely through while expanding at a depth of about 3”. The expanded bullets were wide, creating permanent wound channels about .55” wide. Penetration through standard fabric, denim, and leather was also great, although in some of the heaviest layers and materials the bullets slightly deformed, but still expanded. Penetration depth was 14-16” in these conditions, with many bullets still passing completely through.

This round is not at all a speed-demon in terms of muzzle velocity. In fact, the V-Crown bullet types are hardly fast at all by comparison to most others out there in common use. If speed were the only factor, it wouldn’t seem all that great. If mass was all that we were concerned with, the .45 ACP would have it beat handily.

What SIG’s .44 Special load has is a unique combination of bullet technology, engineering, and outside-the-box thinking. Despite everything it has going against it in terms of abstract numbers, the load is easily on par with any self-defense round out there.  The slug has a nice, large hollow point main cavity and as you can see, it expands nicely with maximum weight retention.  While it doesn’t have quite the weight of the .45 ACP slugs, it still has sizeable muzzle energy. In terms of penetration and expansion, the round did extremely well showing consistent, near optimal expansion. I was very pleased with it and like that it always penetrated deeply, but didn’t over-penetrate to excess. 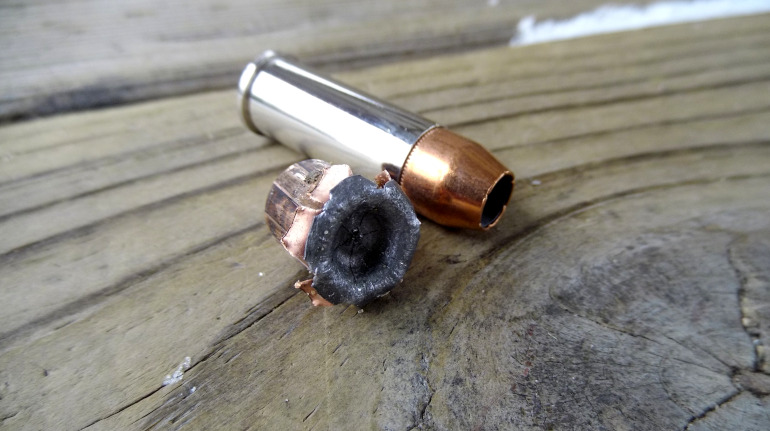 The combination of this load and the Model 69 is hard to beat for a carry revolver. For a daily carry load, the .44 Special is just about perfect, offering high bullet weight, low recoil, and great terminal performance. I think that what SIG did here was completely unexpected and a very interesting move for this great SIG V-Crown cartridge. While not as powerful as .44 Magnum, it is certainly more feasible for normal use.

Accuracy: * * * * *
Considering the short barrel length of the Model 69, this load generated excellent accuracy at all ranges it was tested. I was very pleased with it.

Handling: * * * * *
Recoil was low and easy and follow-up shots were fast. The smooth trigger of the Model 69 was a great compliment to this easy-shooting load.

Reliability: * * * * *
No issues here. Every round went off just as advertised.

Terminal Performance: * * * * *
These big, slow moving bullets do tremendous work in tissue and offer a remarkable degree of penetration and uniform expansion with minimal recoil.

Overall: * * * * *
The .44 Special is a round that has ebbed and flowed in popularity since its introduction. While it struggles for acceptance today against nearly every other common carry cartridge, it still maintains a solid follower base. Thanks to surprising innovations like those from SIG, it’s guaranteed to stick around well into this century.