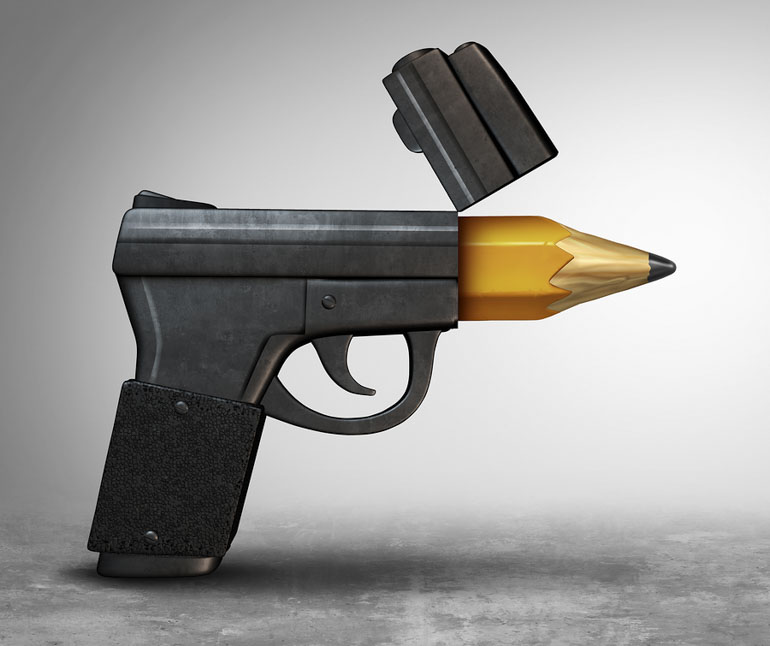 Several chapters of the report chronicle myriad security breakdowns, systemic school security failures and the absence of a cohesive protocol that allowed Cruz to easily enter the campus and embark on the shooting rampage: Gates and doors were left unlocked while others were inaccessible just when students needed additional hiding spaces; there were no public address system speakers in the hallways that might have improved communication throughout the bloody chaos.

Additionally, the report notes that a recent shift in policy by Broward Sheriff Scott Israel, telling deputies that they “may” enter a building where there is an active shooter, where previously they were trained to enter, created confusion and led to inaction by eight deputies responding to the active shooter.

One of the responses to the report has been the introduction in the state Senate of SB 7030 which would remove the prohibition on teachers carrying in class and allow county sheriffs to establish concealed carry training programs for teachers and staff if their districts approve.

But the thought of teachers given the ability to protect their students is too much to contemplate for the ACLU of Florida. They way they see it allowing districts to increase the number of armed individuals on campus further endangers students.

As the ACLU wrote recently,

Last year’s Marjory Stoneman Douglas Public Safety Act was an unprecedented expansion of law enforcement reach into schools. For the first time, a gun was mandated in every school. We don’t have the money – or the need – for that. As the MSD Public Safety Commission found, school police, like the officer stationed at Stoneman Douglas that fateful day, are “typically not faced with many high-risk, high-stress situations … As a result, they are not afforded the chance to maintain and exercise their tactical skills other than in training scenarios.”

That’s a good job of cherry-picking from the MSD commission report by the ACLU. Somehow they failed to mention that the same group endorsed arming teachers in order to protect students from the consequences of overly permissive school administrators and criminally incompetent law enforcement officials such as those in Broward County.

The Marjory Stoneman Douglas High School Public Safety Commission voted 13-1 to recommend the Legislature allow the arming of teachers, saying it’s not enough to have one or two police officers or armed guards on campus. Florida law adopted after the Feb. 14 shooting that left 17 dead allows districts to arm non-teaching staff members such as principals, librarians and custodians — 13 of the 67 districts do, mostly in rural parts of the state.

Pinellas County Sheriff Bob Gualtieri, the commission’s chairman, pushed the measure at the Tallahassee meeting. He said most deaths in school shootings happen within the first few minutes, before officers on and off campus can respond. He said suspect Nikolas Cruz stopped to reload his AR-15 semi-automatic rifle five times, all of which would have been opportunities for an armed teacher to shoot him.

As a report last week made clear Marjory Stoneman Douglas teachers had identified the shooter as a danger more than a year before he opened fire in the school.

A year and a half before the Stoneman Douglas massacre, some of the shooter’s teachers were surveyed about his behavior. They wrote that he made threats. He was fascinated with guns. They were afraid of him.

Nikolas Cruz told an administrator that shooting guns helped him relieve stress. And when the school district judged whether he might harm other students, he met all of the criteria for aggression and depression.

Those observations, however, were never relayed to police or to mental health workers evaluating whether to hospitalize him for psychiatric care, the South Florida Sun Sentinel has found.

But the ACLU thinks that giving those same teachers the ability to protect their students — and themselves — is an unnecessary diversion of school resources.

At a time when schools are struggling to meet the needs of students and to recruit enough teachers to comply with the state constitution’s class-size requirements, Senate Bill 7030 would allow more education funding to be spent on hardening schools despite evidence that more guns on school campuses do not prevent violence. This is unnecessary – despite the tragic mass shootings we’ve experienced, schools remain one of the safest place for children – only 3 percent of violent youth deaths occur at school – a rate that has been steady for decades.

That last part is, of course true. Schools are statistically extremely safe. A student has about a 1 in 614 million chance of being killed by gunfire in a school. But these designated gun-free zones are exactly the kinds of locations that are both inviting and difficult to defend for those few deranged individuals looking to commit murder.

Florida’s school districts should have the freedom to decide how best to protect their faculty and students. At least one has hired armed veterans to help protect the campus. But if a district chooses to allow teachers to carry firearms, they shouldn’t be prevented by state law from doing exactly that.