The Royal Wedding this morning went off without a hitch. Of course, it carried with it an increased risk of a terror attack. In the end, thanks to well-trained and -armed men and women, it proved a safe and enjoyable time for participants and spectators alike. The Brits, known for their unarmed police, took no chances with the event. After all, people around the world tuned in to watch Harry and Meghan tie the knot. Or whatever they call it when royalty does it. Even before the event, news reports said the Brits reportedly spent 30 million pounds on keeping everyone safe during the event.

Unarmed Bobbies do an admirable job keeping the peace in Great Britain. Mostly. However, deep down, the Brits know that harsh words and commands to STOP accomplish little against hard cases. They understand that the only thing that stops bad people with evil in their hearts is a good guy with a gun. So armed good guys were out, patrolling in force. And they carried more than sidearms.

Note the “Thin Blue Line” patch on this policeman’s chest.  Shame on him for leaving his dust cover open.  Pat Rogers, RIP, would not approve. Given how short-barrelled AR platform guns seemed common this year, one wonders if they had .300 Blackout in those mags or 5.56 rounds. Ahead of time, armed police and military folks permeated a security cordon around every aspect of the event. And along the route from the chapel to Windsor Castle, they kept a close eye out for threats from the windows and rooftops lining the route. And oh yes, the Brits must have bought a lot of American Magpul PMAGs. Some people think that armed security dampens the fun, but that’s not true. Armed security just keeps everyone safe as they have fun. Looking closer, note that old MP5 mounted with an EOTech. While the cheek weld must be tough on that, the MP5 isn’t a long-range tool. So, which flavor do the Brits prefer in their HKs…115-grainers, 124s or 147s? 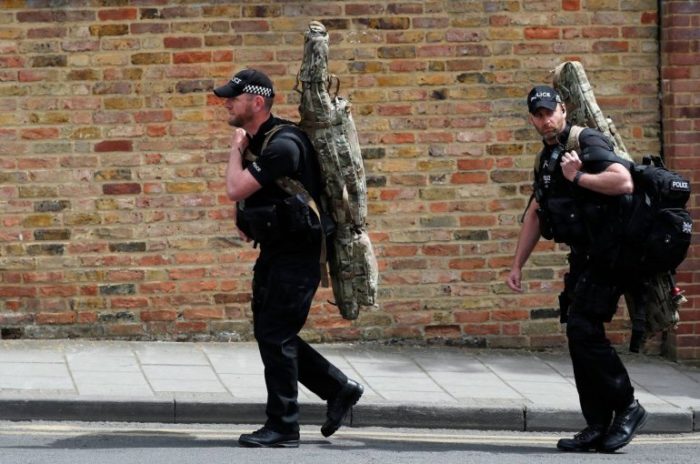 Meanwhile, these men also brought the tools necessary to reach out and touch bad people. 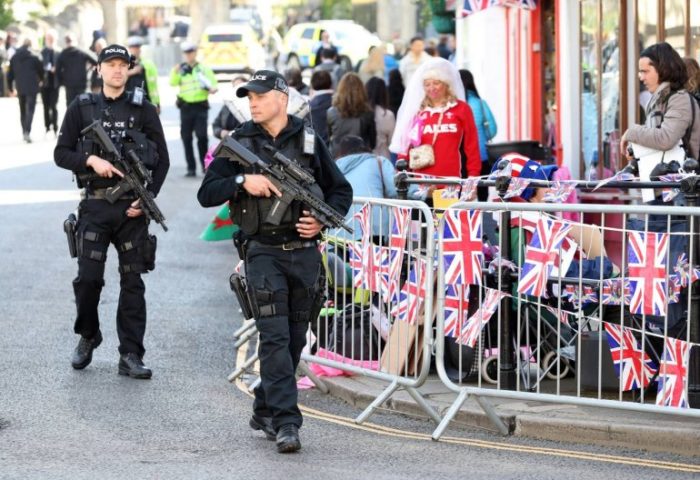 In a society accustomed to seldom seeing firearms in person, this event featured a lot of firepower. At the same time, people didn’t seem the least bit anxious with all the armed police on display. Even ones that can’t close their dust covers on their ARs.

In the end, all the work paid off handsomely. Prince Harry and now-Princess Meghan in the carriage following the wedding ceremony. Here’s to happily ever after!