A question I am often asked is if a person should get a muzzle brake for their rifle. There is some ground to cover in answering that question, so let’s start with some definitions.

In today’s shooting world there are many guns that come with threaded muzzles that can accept a variety of different attachments. The most common three today are muzzle brakes, flash hiders, and suppressors.

Occasionally you will see some alternate nomenclature such as ‘rise eliminator’, ‘silencer’, and ‘flash suppressor’ being used. These are odd terms that I avoid using because they are just slang or fancy Tactical Polo Bro lingo.

‘Silencer’ is a technically incorrect term for a suppressor as it merely prevents serious hearing damage to the shooter. No gun is “Hollywood silent.” In fact, most guns equipped with suppressors are still loud as hell. They just take the edge off for the most part.

A flash hider — also called a flash suppressor — essentially just redirects the fireball at the gun’s muzzle in more productive directions. A common flash hider is the military A2, which has a solid bottom to keep dirt and dust from being kicked up when firing.

Some flash hiders are multi-pronged and others have small slits or ports. These devices don’t reduce recoil and only come into play when firing in low light conditions or when you’re just trying to make your gun look cool, which is arguably 99% of what flash hiders do.

It should be noted that, even if you’re using ammo that’s already using low-flash powder, there will still be some flash just as there is still some noise with a suppressor. 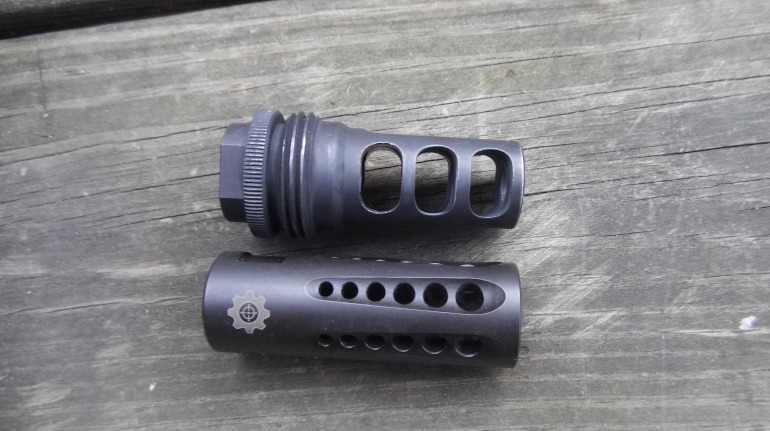 The SilencerCo ASR brake is a chambered brake. It has three baffles that deflect gasses to reduce recoil. The Next Level .450 Bushmaster brake is a radial brake that effectively reduces the beastly recoil of the big-bore cartridge. (Josh Wayner for TTAG)

A muzzle brake is different from a flash hider in that it has ports that redirect the muzzle blast to reduce recoil, as it should be noted that the vast majority of a gun’s recoil comes from the muzzle blast itself. The dramatic expansion of gasses can be tamed.

A suppressor reduces recoil just by merit of trapping that gas and preventing it from expanding. A muzzle brake forces the gas out of one or more angular ports, with the angle of those ports allowing the gun to essentially be pulled forward, thus negating the recoil impulse. Different muzzle brakes do different things and can be used for different purposes. There are two main kinds that I will address: radial and chambered.

A chambered brake has a series of open ports that the bullet passes through. Each port bleeds off more gas to allow the recoil to dissipate. A chambered brake typically has ports only along the three and six o’clock sides, but some have ports at twelve o’clock as well which can force the muzzle down to prevent jump, especially when shooting off a bipod. This is commonly called a compensator. Examples of flash hiders. While they do not reduce recoil, they do mitigate some flash at the muzzle. (Josh Wayner for TTAG)

Compensators are essentially a type of muzzle brake that is designed to prevent muzzle jump and not just the rearward recoil impulse. There is some confusion over just what the true differences are between a compensator and a muzzle brake, but for the purposes of this article we will lump them together since there is no real clear-cut separation. This tends to vary by manufacturer. Consider compensators to be a subtype of muzzle brakes and you’ll get along fine.

Radial brakes have ports drilled around the entire body. These ports are quite small, but they work in tandem to keep the muzzle in the same place. A down side to radial brakes is that, while very effective, they tend to kick up lots of debris if in the field. Using a radial brake while prone can result in lots of crap being kicked up all over you and your gear.

Who Needs A Muzzle Brake?

I hear it at the range all the time…a person who can’t master their rifle needs to put a brake on it. This is especially common for hunting rifles. Instead of going with a smaller caliber or a gun that fits them better, a typical “fix” is to install a brake. A muzzle brake typically cuts recoil by 50% or more, meaning that an otherwise powerful gun can be fired comfortably.

Muzzle brakes aren’t just for high-recoil rifles. Competition shooters almost always put a brake on their rifles as a way to make even low-recoil guns easier to fire. Competitions that require fast shooting see many brakes as they make rifles like the AR-15 feel like they have no recoil at all. Long range shooters prefer them because they allow the shooter to see hits through their own scope and then make adjustments on the fly.

Hunters is a group that benefit from muzzle brakes for many of the same reasons as competitors. Many hunting rifles are higher-recoil and are fired from awkward, stressful positions in the field. A brake can make it so that the hunter can get back on the gun faster after the first shot. Hunters who take longer shots are again benefited by being able to spot their hits.

There are a few downsides associated with muzzle brakes that need to be considered. The first of these is noise, which is probably the most problematic part and a major reason why some people straight-up hate them. While a good muzzle brake will reduce felt recoil substantially, it will also substantially increase the amount of perceived noise and pressure a shooter feels. The SilencerCo muzzle brake seen here makes a standard 16″ AR rifle almost unbearable to fire, even with hearing protection in place. The noise and blast feel much greater than with a flash hider and the concussion at the muzzle can be felt in the sinuses. While it virtually eliminates recoil, the gun isn’t fun to fire in any great volume with the brake in place.

Many hunters prefer to go to the field without hearing protection thinking that it will be just one shot and they won’t need it. I made that mistake last year with a .450 Bushmaster carbine.

I ended up taking a few shots due to an almost instantaneous malfunction and I profoundly regretted my lack of hearing protection. I had a terrible ringing in my ears for weeks. I didn’t think it would be that big an issue due to the fact that I’ve hunted for years with a muzzleloader that has a very long Kentucky-style barrel.

The muzzle loader is a relatively quiet gun and I’d compare it to a loud firecracker in most cases, but certainly not ear-shattering. The .450 Bushmaster’s chambered brake caused me some serious hearing damage that day and it was a completely preventable situation.

I wear light hearing protection in the stand now as a result. I can still hear game coming, but won’t hurt myself by taking the shot in tight wooded confines. I have since installed a radial Next Level Armament .450 Brake.

The blast and concussion are two separate issues. Some shooters I know take a Tylenol after a match because of the headache they come out with. Many won’t talk about it for fear of seeming unmanly, but your body is telling you something. I had had shooters complain of their eyes hurting, their sinuses aching, and low-grade migraines after firing SBR-length guns and carbines with muzzle brakes attached.

To Brake or Not To Brake?

Most people don’t really need muzzle brakes on their guns. Large caliber rifles such as the .450 Bushmaster, .338 Lapua, .300 Win Mag, and others like them certainly benefit from reduced recoil. I believe that most people that own and use rifles that generate tremendous recoil will want a brake as the benefits outweigh the possible downsides. The standard A2-style flash hider on the far left is often just a fancy thread protector. The Next Level .450 brake is very compact but effective. The two SilencerCo ASR devices on the right can accept suppressors that thread on over top of them. (Josh Wayner for TTAG)

But what about people who shoot huge guns like .375 H&H, .458 Win Mag, and .416 Rigby? It’s rare to see safari-type guns with brakes simply for the reason that those guns aren’t shot that often and carried a great deal by people who have a desire to maintain a classic aesthetic.

I have seen big game hunters with braked rifles, but they are few compared to those who go with a bare muzzle. The .338 Lapua guys who shoot steel at a mile have a different set of needs than a guy with a .416 taking on a cape buffalo. Pistols with muzzle brakes are a bit of a weird topic. Most modern pistols don’t need a brake. I would say that it makes virtually no sense to add a brake to a common 9mm pistol unless you were going for looks.

Length is immediately added to the barrel and noise at the muzzle is increased dramatically. A handgun hunter may benefit from a brake on a big bore revolver, but even then it’s not necessary in most cases due to the added blast. Firing a braked .460 S&W feels like setting off a grenade in your hand.

Competition shooters are a group that typically benefits from a good brake. This is a case where a speed-shooting competitor needs to keep their gun level to the target, usually while firing reduced or special target loads. It is common to see 1911-style guns with a brake on the muzzle in these competitions.

At the end of the day it will be a personal choice to brake or not. A brake on a home defense rifle is a hard pass for me as the blast and concussion would result in disorientation. Will a flash hider be better if firing a 5.56mm rifle indoors with no hearing protection? Hard to say, but why go there?

Would I want a brake on a carry gun? Again, probably not. The Tactical Polo Bros in the audience will defend their Roland Special to the end, but in real life nobody carries guns like that and if you do, you should rethink your carry preferences or perhaps take an actual self-defense course. The choice is yours. Muzzle brakes are common and widely available, but don’t be surprised if they aren’t your cup of tea. You really can’t go wrong with a flash hider in 90% of circumstances, but for that remaining 10%, reduced recoil can help at the expense of added noise and discomfort.