Believe it or not, “flintlock” is actually a catch-all term for a variety of different lock mechanisms, in addition to being a specific lock mechanism itself. It’s kind of like “Q-Tip” and “cotton swab.”

Lock mechanisms were undergoing a transformation in the 1500s and 1600s. New designs came on the scene and replaced old ones. Inevitably, there were some “transitional” mechanisms – like the doglock. Appearing around 1630 or so, the doglock mechanism is one of a handful of designs that fits under the flintlock umbrella. Differing from the earlier snaphaunce (or snaphance) locks, the frizzen and the pan cover are part of the same unit. When the frizzen is struck by the flint, the pan is automatically opened, the sparks fall into the pan, the powder ignites, and the firearm is discharged.

Snaphaunce mechanisms featured a separate frizzen and pan cover, which allowed the cover to act at the safety. Even if the hammer were to fall and hit the frizzen, the gun would not fire because the priming powder would still be covered. In this photo, you can see that the flash pan, circled in red, is protected by a cover that is separate from the frizzen: 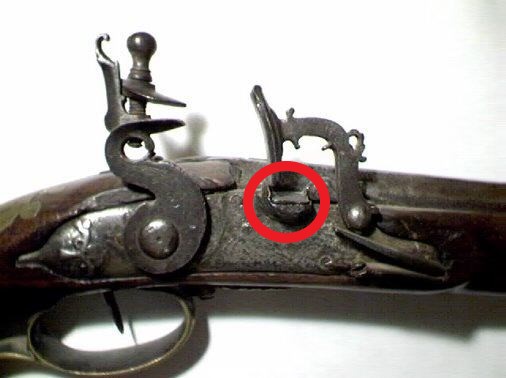 The doglock, with its integrated frizzen and pan cover, did not have a half-cock sear, just like the snaphaunce before it. Therefore, a new piece of equipment had to be added to the lock to act as a safety. Enter the dog. Why was it called a dog? I guess if you close one eye and squint with the other, it kind of looks like a dog’s ear? The dog was a simple hook that attached to the rear of the lock plate behind the hammer. The hook fit into a notch in the hammer, which prevented it from falling if the trigger were to be pulled. Pulling the hammer back just a tad more would cause some slack between the hammer and the dog, allowing it to be swung out of the way so that the hammer could fall and ignite the powder charge. The dog is visible in the photo below. Note that it has been swung up, but it is not able to engage the notch in the hammer because the hammer has not been pulled back far enough. By 1680 or so, the doglock had fallen out of favor in Europe and was being replaced by the true flintlock design. Nonetheless, it hung around for a few more decades and even longer in the American Colonies, where trends and technology were always playing catch-up to their European cousins.